When Greil Marcus wrote of "the old, weird America," he was referring to the folk music of the 1920s and 1930s anthologized by Harry Smith. This 2-CD live recording of Karen Dalton transports you to a time both old and weird, except it's during the peak of the folk revival of the 1960s. Dalton, who's become a cult figure following her death in 1993, possessed a bluesy edge to her voice that led to Billie Holiday comparisons. The resemblance is most prominent on the second disc of Cotton Eyed Joe, where Dalton delves deep into her soul to create a sound that's simultaneously forlorn and fascinating while accompanying herself on 12-string guitar and banjo. Taken from tapes recorded at long-forgotten Boulder, Colo., folk den the Attic in 1962, the set finds Dalton covering songs from Fred Neil, Ray Charles, Jelly Roll Morton, and Woody Gurthrie, as well as traditional folk tunes, but she makes each her own, spryly arranging them to her own unique vision and abilities. Cotton Eyed Joe will thrill those looking for a glimpse into that void where the old, weird America might still be found. 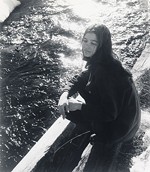 In Her Own Time
The return of Karen Dalton