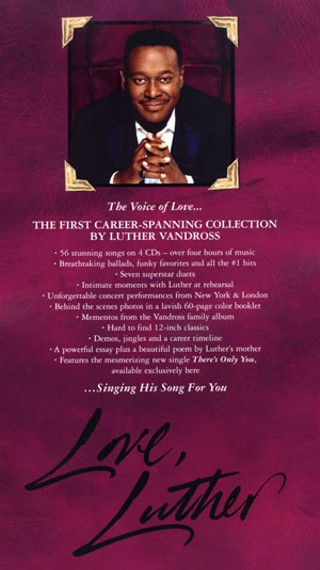 
Had Luther Vandross been born during the second war to end all wars rather than during the Cold War, he'd rival Marvin Gaye. Instead, the Bronx-born crooner came of age in Aquarius on his way to the disco era, applying his worship of Diana Ross, Aretha Franklin, and Dionne Warwick onto early live and session work with David Bowie ("Young Americans"), Chic, Sister Sledge, and Donna Summer. Love, Luther thereby evolves classic soul into modern R&B over a fluctuating 4-CD arc. Solo debut Never Too Much, a No. 1 R&B smash in 1981, yielded the singer's lifelong interpretive showcase, Burt Bacharach and Hal David's "A House Is Not a Home." Vandross' airy tenor comes edged with bite: Diana Ross with a Marvin Gaye lining. Exhibit B: covering Gaye/Tammi Terrell duet "If This World Were Mine." Sam Cooke's "Having a Party" does. The singer's turn at the Carpenters' "Superstar" is even more convincing, yet Vandross could compose, as the radio-made bounce of original "She Loves Me Back" proves. Unfortunately, after 1983's The Night I Fell in Love, slow jams smother all. Nineties Vandross, disc three, simulates a rain machine, though Beyoncé duet "The Closer I Get to You" rouses the siesta. CD four bookends the first, Vandross keeping it more real, masterful, thanks to 2003's Dance With My Father, set against 10 flawless minutes of "A House Is Not a Home" live at Radio City Music Hall. Vandross, 52, died two years later, a legacy still searching for its proper liner notes and a home. 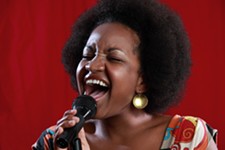 Family Affair
The importance of being Akina Adderley