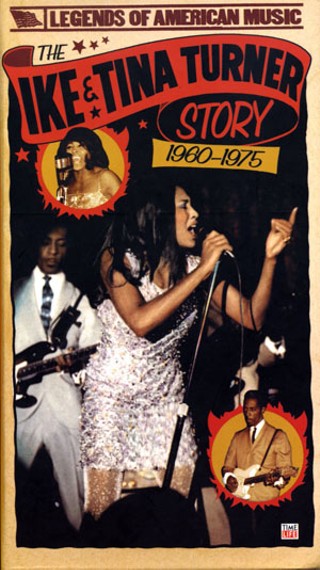 
In their early-1960s heyday, no touring act was more incendiary than the Ike & Tina Turner Revue featuring the nonstop Kings of Rhythm and shimmying Ikettes. The full-bore show-band with smokin' horns and blistering rhythm section led by Mississippi pianist-turned-guitarist Ike Turner blazed every back road of the chitlin circuit and onto R&B stages for 15 years with pure aural sex, soul, and sweat. From the opening wail of "A Fool in Love," The Ike & Tina Turner Story means business. Time Life's 3-CD book-style set features two studio compilations and a live recording, the former selections cherry-picked from a variety of labels quickly shifting from the bluesy, gutbucket, juke-joint Ike & Tina ("It's Gonna Work Out Fine," "Something's Got a Hold on Me," and "I've Been Loving You Too Long") to the explosive rock-era repertoire that reflected the group's expanded tastes and popularity (Beatles' "Come Together," Stones' "Honky Tonk Women," CCR's "Proud Mary"). Ike Turner's version of "River Deep, Mountain High" wins out over Phil Spector's, the right choice for this collection, yet by this time the set has faltered some, skipping over the band's later material in favor of the 1969 concert disc released as In Person. Too bad it wasn't on DVD, because the soulful allure and merciless melodies beg for visuals of the magnificent Tina and the Ikettes in their performing glory. Even spotty, The Ike & Tina Turner Story is as close to showtime as a set's likely to be.