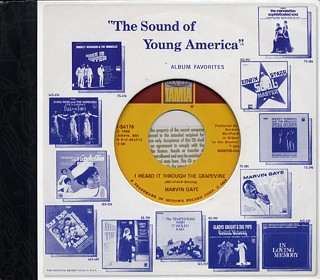 
Since every double-disc should be a single, every EP a 45, six CDs of The Complete Motown Singles, Vol. 8: 1968 could edit down to a quartet. With Hip-O Select's mind-blowing Internet series currently clocking in at 43 discs on its way to final Detroit headquarters year 1972, less isn't more, however. More is paramount. By now, all the girls sound like Diana Ross (Rita Wright's supremely "I Can't Give Back the Love I Feel for You"), the Four Tops transcend rapture ("Walk Away Renee"), and Smokey Robinson again proves himself all series MVP ("If You Can Want"). Runner-up Stevie Wonder clacks down dominoes on disc two, gospel B-side "Why Don't You Lead Me to Love" trumping trifle "Shoo-Be-Doo-Be-Doo-Da-Day." Marvin Gaye & Tammi Terrell refute "Ain't Nothing Like the Real Thing," and flipside "Little Ole Boy, Little Ole Girl" delivers its title promise from the ill-fated pair. One of the best CDs of the campaign, three's all marquee: Wonder's "My Girl," Gaye & Terrell's "You're All I Need to Get By," and Martha Reeves & the Vandellas crackling B-side "I Tried." Discs four and five can't keep up, but that's relative in the face of Smokey's "Special Occasion," Gladys Knight & the Pips' tempting "I Wish It Would Rain," and the backward Eivets Rednow blowing "Alfie" on his harp. Wonder-ful. The Temptations stamp the final platter with "Rudolph, the Red-Nosed Reindeer" and "Silent Night, Holy," plus the song prefacing psychedelic 1969, "Cloud Nine," which goes up against Marvin Gaye's "I Heard It Through the Grapevine." More. www.hip-oselect.com.