Jon Dee Graham (pictured) is the subject of a new documentary film, Swept Away, scheduled for release next spring by Treadmill Productions. Director Mark Finkelpearl, who discovered Graham's work through his appearance on Willie Nelson's live 2005 benefit DVD, Songs for Tsunami Relief: Austin to South Asia, and who has worked with the Discovery Channel and National Geographic Television, followed the local guitarist over the course of nine months. Footage from shows in Washington, D.C.; New York City; and around Austin made the cut both visually and sonically; a supplementary live album gets the CD-release treatment this Friday at the Continental Club. "Just like when you read between the lines, there's a lot of stuff that's not even talked still there," says Graham. "There's a feeling in parts of the film, a darkness in the subtext, that reveals a lot about my nature that I didn't particularly mean to come out." The experience has proven beneficial for Graham, influencing his writing approach for his next album, 50 Angry Men, due next year. "The thing that leapt out at me was how uncomfortably intimate the acoustic sets are," Graham says. "I understand the attraction of that now, and I want to explore that in the studio. I've got more than enough songs. I just don't know if they're the right songs. I'm still flailing around looking for the other half of the album."

"This is used for spirit-possession first and foremost," says Austin musicologist Joel Laviolette, left, of the mbira, a traditional instrument of staggered metal keys fixed to a wooden board. "It creates circular, poly-melodic rhythms used to communicate with ancestral spirits through dancing. It's beautiful and mesmerizing." Laviolette is similarly enchanted with the instrument's capabilities. He's repeatedly traveled to Zimbabwe to study under mbira master Newton Gwara and has extensively chronicled the artists from the region through field recordings, conducted with a battery-powered, digital audiotape machine and a series of microphones, released on his nonprofit label, Mhumhi Records. Each of the label's 11 albums from the region is on par with Smithsonian Folkways Recordings, all featuring beautiful packaging as well as line-by-line translation of the lyrics. Earlier this year, Laviolette added two local albums to the catalog: his own mesmerizing debut, Ndiro YeMidzimu, and a live EP from Rattletree Marimba, an Austin-based sixpiece that interprets traditional mbira music on a series of marimbas (essentially large wooden xylophones) that Laviolette constructed. The group performs at Ruta Maya on Saturday as part of the Pungwe: An African Dance Party, which benefits Brother Brother Sister Sister, a nonprofit providing care to AIDS orphans in Zimbabwe, among other notable organizations. The Chronicle would like to take this opportunity to wish a swift recovery to Ruta Maya booker and promoter Jennifer Marchand, who was struck by a car before the club's annual Halloween Ball.

• Ian MacKaye would approve of the Broken Neck. The new DIY venue, 4701-B Red Bluff, is hosting regular punk shows on the Eastside, helping fill the gap of the sorely missed Snake Eyes Vinyl record store, which is moving to a new, undecided location. Super Secret Records' Teeners throwdown Friday, along with the Pepperonis, the Capitalist Kids, Sex Advice, and Stymie.

• Obatallah, the longstanding "maestro of ceremonies" for the Waxploitation!'s Soul Happenings, died Saturday morning due to complications arising from diabetes. He was 68. Funeral arrangements are pending at Phillips Upshaw & Richard Funeral Home.

Rock Around the Clock

For its grand reopening Monday night, the Austin Music Hall was still a hard-hat-required construction site, or at least that appeared to be the case since the exterior walls of the second story weren't yet complete and Direct Events owner Tim O'Connor and his staff donned commemorative helmets for the occasion. The view and sound from the mezzanine level was impeccable, particularly for opener Kacy Crowley and Del Castillo, who did their best to heat up the otherwise freezing building, but there was clearly still more work to be done, from the hanging of drywall to the installment of glass windows for the will-call booth. "We're not trying to hide the fact that this is a work in progress," acknowledged O'Connor, who could not be bargained down from his 95% complete estimation. "It was time to say that no matter what, we're going to be open. We're very close to where we want to be." Construction resumed Tuesday morning at 7am and is scheduled for completion by The Bobby Bones Show Anniversary Bash, featuring Sean Kingston and Lifehouse, Saturday, Dec. 8.

Lyle Lovett testified before the U.S. Senate Judiciary Committee last Tuesday on behalf of the MusicFirst Coalition, arguing the need for broadcast radio to pay a royalty to performers, in addition to those currently allotted to songwriters (Internet, cable, and satellite radio already compensate artists for airplay). The legislation would set the precedent necessary for artists to collect similar fees from foreign radio stations, as well. "It's a matter of fairness and survival," says Austin City Limits producer Terry Lickona, who lobbied on Capitol Hill for the legislation earlier this year on behalf of the Recording Academy. 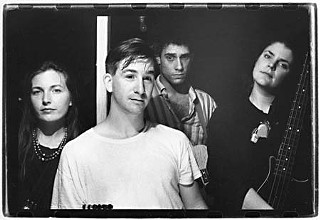 Stars of Austin's New Sincerity movement in the 1980s, the Reivers, who released two albums for Capitol Records (see "Pop Beloved," April 26, 2002), are rehearsing for a one-time-only reunion show in the near future. "Cindy [Toth] said she wanted to do it," relays singer/guitarist John Croslin. "Everybody is getting into it for the rehearsals. It's been fun, and it sounds good." Along with engineering and mixing work for bands like Spoon, Guided by Voices, and Pavement, Croslin has kept busy working on a solo album for the past two years. "I don't know if it's all that different, honestly," he says. "It comes from the same place." Does that mean it could translate into future recordings from the Reivers? "There are no plans to at this point," Croslin contends. "We're all in different places."

"With downturns in album sales and the rise of illegal downloading, this issue is becoming increasingly important for traditional artists." Scott Gillmore, vice president and market manager for Emmis Austin Radio, however, believes that broadcast radio, a $20 billion industry, which has seen no overall revenue growth in the past seven years, shouldn't be forced to bear the record industry's burden for its recent financial shortcomings. "For the past 70 years, there's been a very mutually beneficial relationship between the artists and the stations," he says. "This legislation would turn local radio upside down." Stay tuned.