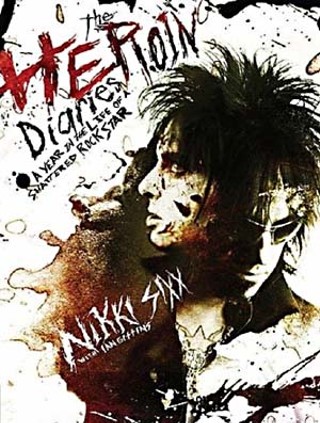 The Heroin Diaries: A Year in the Life of a Shattered Rock Star


If Mötley Crüe's 2001 epic, The Dirt, equals the Moby-Dick of debauched music autobiographies, Nikki Sixx's Heroin Diaries cooks it up Persian style into a cotton ball ready for the shooting gallery. "If one person reads this book and doesn't have to go down the same road as me, it was worth sharing my personal hell with them," writes the Crüe bassist and group's principal songwriter. Sobriety speak for "don't try this inside your mansion's walk-in closet," Heroin's raison d'être reeks disingenuous for the simple fact that most rock & roll drug-casualty morality plays – especially as related by the offending millionaire survivor – rarely conceal the boasted conceit at their center: I lived to tell all. Another whale of a tale it is, too. Unfortunately for impressionable addicts to be, one rock star's monumental license with sex, drugs, and punky metallic Kiss-rock makes for another fan's literary high. The story arc may be rock stock – disaffected youth channels familial wounds into platinum grooves – but Sixx's supremely self-aware narcissism bleeds genuine likability even when he's bending his A&R mensch's date over a bench backstage as she protests being on her period. The moral of the story: Sixx shooting buddy and Ratt guitarist Robbin Crosby going from Ferrari to penniless AIDS grave.