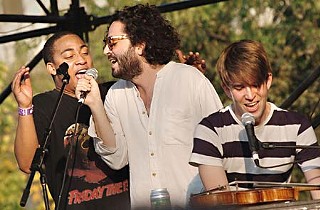 Cadence Weapon, Dan Bejar of Destroyer and the New Pornographers, and Final Fantasy karaoke to “An Actor’s Revenge." (Photo by John Anderson)

Who better than Austin's Riverboat Gamblers to belt out the unofficial theme song for Fun Fun Fun Fest? The returning champs from last year's inaugural outing, in their last live set before studio hibernation through the winter, opened with a shortened version of the Big Boys anthem "Fun, Fun, Fun" Sunday night, providing the capstone for two raucous days in Waterloo Park. Other than a shortage of recycling outlets and catered food for the artists, which led to the New Pornographers' Carl Newman and Neko Case practically begging for Rice Krispies Treats on stage Saturday, the entire festival went off without a hitch.

On the local front, Okkervil River sounded broken, beaten, and uncannily clustered, all of which worked in Will Sheff's favor for The Stage Names' "Unless It's Kicks" and "Our Life Is Not a Movie or Maybe." Brothers & Sisters harvested Byrdsian country rock, Zykos' visceral indie rock climaxed during "Yer Blood," and White Denim briefly stole the show with its ecstatic Band of Gypsys-inspired funk and freak-outs. Iron Age thrashed with metallic fury, while the Sword and Oakland's Saviours both screamed Sabbath Bloody Sabbath.

Saturday afternoon, Owen Pallett, better known as Final Fantasy, looped layers of violin and piano to re-create the majestic wonderment of He Poos Clouds, culminating with covers of Mariah Carey's "Fantasy" and Destroyer's "An Actor's Revenge," the latter performed a second time with help from songwriter Dan Bejar and rapper Cadence Weapon. Told backstage that his biggest fan was a middle-aged suburban mother (my girlfriend's), Pallett cheekily responded, "You'd be surprised how often I get that." The Polaris Music Prize winner was later spotted swinging from the rafters to Girl Talk, along with members of Austin's Mothfight, while local mash-up maestro Car Stereo (Wars) caused a similar commotion Sunday afternoon, pitting Rammstein against "Stacy's Mom." Returned local Tim Stegall joined the reunited Angry Samoans for "Ballad of Jerry Curlan," but Brooklyn's MGMT proved the surprise hit of the day, crafting disco grooves with three-part harmonies like a cross between the Bee Gees and David Bowie, topped only by the pop theatrics of tourmates Of Montreal, whose encore of Prince's "Purple Rain" was prefaced as "unironic" by fashionable frontman Kevin Barnes. Afterward, at Mohawk, the balcony nearly imploded with the opening note of the Murder City Devils' "Idle Hands," the capacity crowd chanting as one as Spencer Moody practically swallowed the microphone whole. MCD bassist Derek Fudesco provided the soundtrack for Sunday-morning hangovers via the dusty, washboard blues of the Cave Singers. The Saints, meanwhile, blasted back to '77 with "(I'm) Stranded." Now a threepiece and experimenting with vocals, Don Caballero calculated its prog-rock suites with unrivaled technical proficiency but still sounded a bit outdated in comparison to Battles' hard-wired, avant-garde instrumentals. Ted Leo & the Pharmacists ended their relentless political tirade with Chumbawamba's "Rappaport's Testament: I Never Gave Up," dedicated to late J Church guitarist Lance Hahn. Bringing the weekend full circle, Cat Power, whose middle name turns out to be "Spacemen 3," closed the evening with a canonical collection of covers, each enveloped with her sultry, soulful purr. Biscuit would have approved.

In May 1975, Frank Zappa recorded a two-night stand at Austin's Armadillo World Headquarters, which, coupled with a few studio sessions from California, ultimately became Bongo Fury. The album is a timeless musical artifact, documenting his brief reunion with Captain Beefheart and his last outing with the Mothers of Invention. "It was a really good period for him," concurs prodigy guitarist Dweezil Zappa. "He's 10 years into his career, coming off of albums like Apostrophe and Over-Nite Sensation that combine all of the elements he was interested in: rock, funk, jazz, classical. I've always liked that record in particular because it has such raging guitar sounds." Tuesday night at Hogg Auditorium, Dweezil Zappa & the Zappa Family Trust re-create Bongo Fury's "Carolina Hard-Core Ecstasy" and "Advance Romance" note for note, along with other selections from their father's vast repertoire, at times playing in sync with archival video footage to create the ultimate tribute experience. "A lot of Frank's more awe-inspiring and technical moments are overlooked because he put out over 75 albums," says Dweezil Zappa. "The purpose is to put his music on in a way to get people to see the bigger picture of his vision and how much he accomplished." 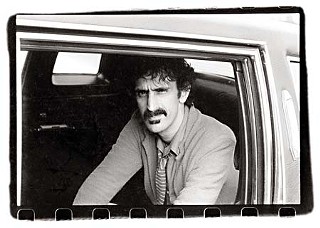 • Paul Drummond, the British author of Eye Mind: The Saga of Roky Erickson and the 13th Floor Elevators, the Pioneers of Psychedelic Sound, appears at BookPeople on Saturday. Monday night, Erickson tapes an Austin City Limits performance. Rumored special guests include ZZ Top's Billy Gibbons, R.E.M.'s Peter Buck, Wayne Coyne of the Flaming Lips, and Spoon's Britt Daniel, though the latter is still scheduled to appear at the Gibson Amphitheatre in Los Angeles. Call the ACL hotline at 475-9077 for information regarding space-available tickets.

• Explosions in the Sky are confirmed to curate an All Tomorrow's Parties event, May 16-18, 2008, at Butlins Holiday Centre in Minehead, England. "We gave them a list of 50 bands we'd like to play, and they're going to ask all of them," confided percussive catalyst Chris Hrasky before the group's Fun Fun Fun Fest headlining set Saturday night. "We keep going through that process until the lineup is complete." Thus far the bill includes locals Trail of Dead and Iron & Wine, along with Dinosaur Jr., Broken Social Scene, and Adem.

• The Austin Music Commission's town-hall meeting to discuss possible changes to the Austin sound ordinance (see "Off the Record," Oct. 19) proved more of a pep rally for pissed-off citizens than a meeting of minds Monday night at Momo's. Along with affiliates of the Red River District, Mayor Will Wynn made a brief appearance, emphasizing the need for an "urban core" and manageable compromise, but neglected to mention whether or not he approved the amendments, which would exponentially lower the allowed decibel limit for live-music venues, excluding those in the Sixth Street and Warehouse districts. The commission has submitted a list of resolutions to City Council, which calls for, among other things, an audio expert to examine both residential development and venue renovation projects, the creation of programs to reward said entities for soundproofing efforts, and the analysis of the Austin Police Department's citation data.

Old-school mohawks were all the rage at Waterloo Park thanks in part to Birds Barbershop. The local salon cropped more than 50 heads on-site this weekend, raising more than $500 for the SIMS Foundation.