Up against the wall, local scene 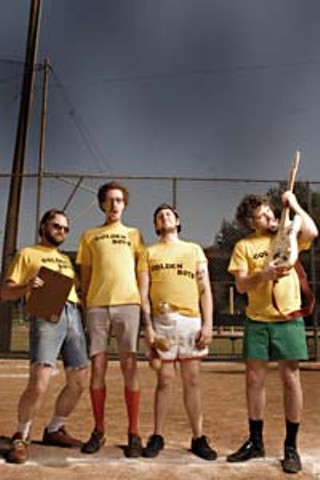 "They're like the uncles you smoke weed with at funerals," Strange Boys mouthpiece Ryan Sambol laughs of the Golden Boys. "They're awesome."

What a pair. The Strange Boys, barely legal and hitting up garage rock with morning-after sway, and the Golden Boys, 10 years their seniors with a penchant for raucous live shows, trekked up the East Coast together late this summer. Tonight, they meet at Randall and Donya Stockton's Rio Rita, Beerland's Eastside little sister. No stage, no guitars, just a Chronicle tab and room to stretch out.

The Golden Boys' sophomore LP, Whiskey Flower (Emperor Jones), took a Texas heat wave and turned on the window unit last summer. Recorded in multi-instrumentalist Nathan Arbeitman's home with lots of help from Rock n Roll Rentals and Lone Star tallboys, Whiskey Flower is a sepia-toned photograph bled through nights of balls-out shows and a million miles of blacktop. And a third LP is already seeping out. The now-Austin fivepiece (singer Matt Hoopengardner was the last Canyon Lake holdout, with John Wesley Coleman on guitar, Bryan Schmitz on bass, Pat Troxel on drums, and Arbeitman) is a "chicken-fried psychedelic sonic hayride," paints Schmitz. 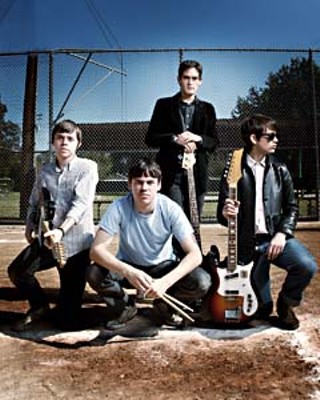 "And the Strange Boys are more like buying acid," pipes up 20-year-old guitarist Ryan Sambol.

While the Strange Boys might take notes from their elders – Ryan's brother and SB bassist Philip even cites Golden Boy Schmitz as a mentor – they stand cool and confident. Ryan's pursed vocals feed a stoned and psychotic basement party, as the Austin-via-Dallas quartet – the Sambol brothers plus drummer Matt Hammer and keyboardist Greg Enlow – muddies earlier spastic blasts on 7-inch Nothing (Dusty Medical Records). A long-awaited debut LP is in the can.

The conversation turns to influences, from the Golden Boys' Jay Reatard, Lee Hazlewood, and Yellow Magic Orchestra to the Strange Boys' Marx Brothers, baseball, and doughnuts. Then it's vinyl vs. MP3 – vinyl wins, of course – the still-strong local scene, and pizza. The Strange Boys quiet down (with two nondrinkers) and let the Golden Boys holler (only one on court-ordered abstention).

Troxel: "If there was an old band that got as drunk as they could with their best friends and got onstage and broke shit and woke up the next morning like, 'Wow, that was the worst thing ever, but I totally loved it,' then we're definitely ripping them off."

Schmitz: "When the Strange Boys get famous and the Golden Boys are riding their coattails, one of the first things that we're going to demand is that Randall gets everybody more beer tickets!" – Darcie Stevens