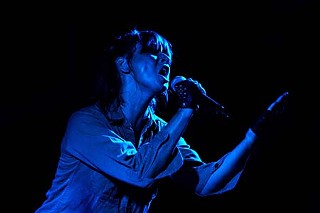 Introduced by her keyboardist as "the greatest soul singer in the world today," Chan Marshall made a viable claim to that exaggerated sentiment, though she clearly didn't seem to believe it herself. Backed by the makeshift Dirty Delta Blues Band, a quartet featuring the Dirty Three's Jim White on drums, Cat Power delivered remakes from both her first and upcoming album of covers in a smoky, Janis Joplin rasp. Though the songs were exceptional, from the conversion of Sinatra's "New York, New York" into a bluesy dirge to Billie Holiday's aching "Don't Explain," her stage presence degenerated from typically awkward to outright uncomfortable. Most jarring was her midsong panic during Moby Grape's "Naked, If I Want To," calling for medical attention for someone in the crowd (apparently a false alarm). Still, a funk-laced "Lived in Bars" and gorgeous "The Moon," from last year's The Greatest, exposed Marshall at her most passionate, the latter repeating, "They own you more than you do," with devastating conviction. Hank Williams' "Ramblin' Man" was given a feminine turn, while the Miracles' "The Tracks of My Tears" was oddly the least soulful number, segueing into the Stone's "Satisfaction." Closer "I've Been Loving You Too Long" was riven with pleading anguish as it bled into a slew of apologies from Marshall, and she exited the stage.