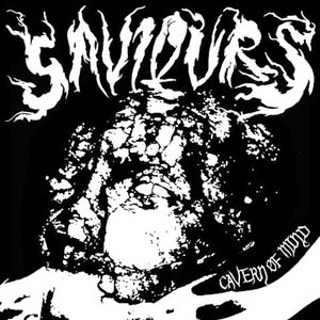 
Kemado Records' punishing 2006 compilation, Invaders, revealed the next generation of metal warriors, children of the damned spawned from Sabbath, Iron Maiden, and Motörhead and a few too many hits of THC. Leading the pack, which included Big Business, High on Fire, and the Fucking Champs, were Saviours, whose saving grace is a relentless and all-encompassing three-prong guitar attack that's heaven and hell. This two-song 12-inch, produced by Joe Barresi (Melvins, Kyuss, Tool), previews the Oakland outfit's Kemado debut, Into Abaddon, due in January, and picks up where last year's Crucifire left off. "Cavern of Mind" is a blistering battle cry that unwinds with a classic power-metal lead, which gallops alongside the war-torn wail of vocalist and guitarist Austin Barber. While at times indistinguishable from labelmates and touring allies the Sword, "Raging Embers" is no less impressive or engaging. Prepare for the Second Coming. (2:55pm, Stage 2)