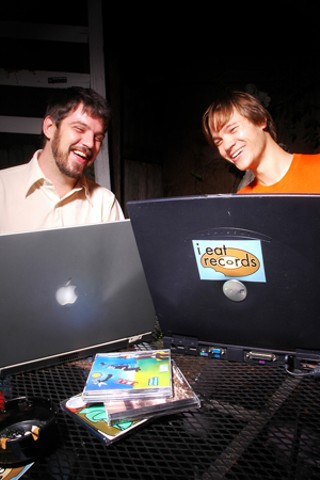 Few local labels have launched as ambitious an inaugural assault as I Eat Records. Formed in 2005 by Jason Callahan and Athens, Ga., native Lynn Boland, the label released seven albums its first year, corralling new local acts like the Casting Couch and the Glass Family alongside Ethan Azarian and the Orange Mothers' Greatest Hits.

"I'm really proud of those releases and every one of those bands," says Callahan. "But we might have been a little too ambitious and invested almost everything we had immediately rather than pacing ourselves, which might have been a better model and one that we're following now."

Like most new indie labels, I Eat Records has had to learn to navigate the industry simply through experience, though both its founders already had established connections in the business. Boland, a graduate student at UT in art history, had been a regular fixture in Athens' collective of bands, while Callahan, who's pursuing a doctorate in math, has managed tours for Okkervil River and Bill Callahan.

On the heels of this summer's excellent pop debut by Black Before Red, Belgrave to Kings Circle, the imprint is preparing its second wave of releases, including Brothers & Sisters' new EP, a reissue of Shearwater percussionist Thor Harris' instrumental Fields of Innards, and Horse + Donkey's much-anticipated debut. The label's business model has evolved with its lineup, as well, attempting to focus only on digital and vinyl offerings.

"That's the model for the future," anticipates Callahan. "But moving to digital-only distribution also poses problems, like how do you promote an album? You can't send out vinyl, and unless you're somewhat established, you can't just send out a link to download the album. Also, what do bands sell at their shows? Of course, they could sell cards with codes on them and people can go home and download the album, but is that what people really want at a show, a little card with a code? No, they want to look at the art and have something physical they can take home."