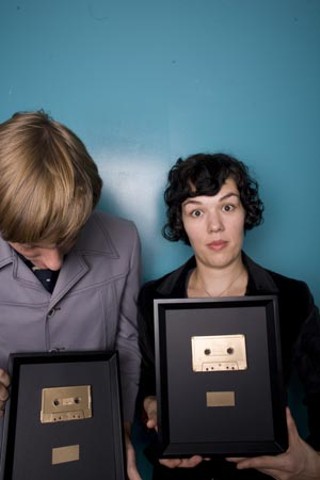 Nestled between Highway 71 and the greenbelt, the Natrix Natrix house is a secluded enclave amid the sprawl of South Austin. Inside the rented one-story home, plates of cinnamon buns and French toast harden after Sunday morning breakfast. Ghost Night's Steven Garcia and Real Live Tigers' Tony Presley jam in the converted garage studio; meanwhile, Kevin Adickes of Mothfight sits at a laptop in the kitchen, clicking through photos of the group's Victorian Pageant staged the night before at the Mohawk. In the living room, Rhonda Turnbough and Seth Whaland lounge comfortably, undistracted as the continual hosts of the house full of friends.

"It's very bohemian – maybe a little too bohemian," laughs Turnbough. "That's why we have a bed in our living room. My first instinct was, 'I don't want a bed in the living room,' but there are always people sleeping here, and otherwise they're just going to be sleeping on the floor or the couch. It's practical."

"There are bands touring that stay here all the time, too," adds Whaland. "Whether they play here or not, there are always people we know coming through town."

The relaxed and communal attitude that pervades the couple's home also defines their label. Established in 2004, when Whaland and Turnbough moved to Austin, Natrix Natrix intentionally revels in anachronism, releasing only cassette tapes and vinyl. Since their first offering, a split cassette between locals Adam Lipman and Viking Moses, the duo has released a pair of vinyl 7-inches (from Mothfight and Portland, Ore.'s Flaspar) and eight more tapes, including former Austin-based baroque folker John Rose's Present Imperfect and the So We Meet Again split from Ghost Night and Whaland's recording moniker, Hundts Kup.

This summer Natrix Natrix also produced its first cassette compilation, featuring artists that Whaland and Turnbough met through intimate shows at Jesse's Bed and Breakfast and their own house. The individually painted tapes feature tracks from Austinites such as Leatherbag, David Israel, the Lovely Sparrows, and Karrie Hopper, as well as notable national artists like Jana Hunter, Deer Tick, and Spencer Kingman.

"Most of us, especially Seth, refuse to give up things we like or ideas that we had about things," Turnbough offers in regard to the dated format of their releases. "We're just sort of old-fashioned, but not that old-fashioned. We're just stuck in the Nineties in a lot of ways. A lot of the most important or influential bands that we listen to were just coming out at that time, so it still feels right to me, and why does it have to disappear? There's just something about doing things handmade. It lacks the pretentiousness of being an über-hipster."

In the midst of declining CD sales and the onslaught of MP3s, Natrix Natrix represents something much more than analog sentimentality. It's a dedication to materiality neglected in the disposability of the Digital Age, a recognition of the significance traced in the art of the album. Histories are bound within the plastic and vinyl itself, a comfort in the low hiss of spools slowly drawing tape from each other, the petroleum product pops that mark their scars. The medium is the message, the physical manifestation transubstantiating emotion into a tangible whole.

"I discovered so much music on tapes, from people making mixtapes," attests Whaland. "It just has a more personal feel to it because each one has to be dubbed."

The handcrafted aesthetic of Natrix Natrix comes naturally to the founders. Turnbough, 27, studied at the School of the Art Institute of Chicago, while Whaland, 25, had already started a basement punk and hardcore label, Square of Opposition, with friend Chris Regec in Bethlehem, Penn. Despite their meager ambitions for Natrix Natrix, Whaland and Turnbough hope to turn the label into a viable part-time job. They plan to release a split 7-inch with Deer Tick and the Shivers and are preparing their first LP with David Israel.

"We're kind of stepping into a new territory with the David Israel LP," says Turnbough. "For that, we've actually thought about how he's going to record it and stuff like that. So now we're investing a little more, which also means distribution and advertising and a little bit of PR. We have a lot of friends that know how to do all that, but we figure we'll just do it once the hard way, and then we'll figure it out by doing it."

Turnbough bounds with an easy, excitable energy, constantly moving about the house with a restless air. Whaland, too, exudes an almost childlike enthusiasm, captured in his wide grin as he talks about Natrix Natrix's most recent release, a 50-run cassette called Circular Depression. Dubbed from an old quarter-inch reel-to-reel tape his father found, the cassette features a man dictating a rambling, open-ended letter, pops and hisses marking the recording as being from the late Sixties.

"He sounds pretty crazy," Whaland laughs. "He's talking about aliens and UFOs and stuff, and I didn't even realize it's my dad until about 20 minutes into it [when] he says, 'Hi, I'm Charlie Whaland!'

"I gave it to him for Christmas, and he said, 'Wow, I really sound crazy on there.'"

Like the label, the house is a wonder of found and underappreciated objects turned art. Large metal letters, remnants of a restaurant sign retrieved from a Dumpster, dance crookedly across the living-room wall. In the studio, a black cloth dotted with felt comets and stars drapes across the corner, accentuating the clubhouse aura.

Natrix Natrix thrives with a joyously willful naivete, situated somewhere between dogged nostalgia and an unpretentious passion for the music and its community. Their house shows bring the elements together, friends and fans packed attentively into the makeshift studio, dancing and joking with the bands in a spirit far removed from Red River. As Morgansorange's Ronn Benway hops barefoot around the crowd with his guitar leading a chorus, the night swells with a carefree camaraderie, rich in the reclamation of youth through dance parties and mixtapes worn through a thousand times.