Set this Circus Down

Loaded with dusty, Depression-era country tunes, Mice & Rifles, one of the only alternative Austin acts on the bill, has a few tricks up its sleeve for the occasion. "I figure one of us will make moves on Faith Hill," fires singer and guitarist Kevin Brinkkoeter. "Next thing you know, Mice & Rifles are on the cover of country-music magazines everywhere receiving a swift uppercut from Tim McGraw." OTR compared notes with straight shooter Brinkkoeter for the rest of the festival.

OTR: I'm excited to see Charlie Louvin; what about you?

OTR: Who's most likely to be packin' heat – besides Billy Joe Shaver?

KB: It's hard to say with this many country music artists drinking in the heat of October.

OTR: What artist is most likely to bring their own barbecue sauce?

KB: Again, Willie Nelson. Think about it. The man makes his own diesel these days! Why not just move on to other necessities?

OTR: Who's most likely to down a six-pack before playing? I'm thinking Miranda Lambert.

OTR: What singer is most likely to wind up in a race car?

KB: Probably me. I once had a tree jump out in front of my car, which made me punch myself in the face with a cheeseburger.

The Kids Are Alright Extracurricular activities continue to pile up for the Austin branch of the Paul Green School of Rock Music. Several students have been making the rounds of the festival circuit, including the PGSOR Music Festival earlier this summer in New Jersey's Asbury Park, headlined by Ween, Bad Brains, and Benevento-Russo Duo, along with the ACL Music Festival, Pecan Street Festival, and next weekend's Big State Festival. "For some kids it's just an afterschool program, but for others it's their entrance into the music industry," says branch manager Rick Carney of the group's opening slot during Buddy Miles' All-Star Blues Jam next Saturday at La Zona Rosa. "This is an invaluable opportunity to go behind the scenes and see how legendary acts perform." Following a recent two-night tribute to AC/DC and a cubicle rock show (Boston, Kansas, etc.), the local institution, which has doubled its enrollment in the past three months, applies the finer points of the Nineties through the Pixies, Radiohead, and Nirvana this Friday and Saturday at Emo's Lounge. "To me, that was that last little glimmer of great alternative rock that came into the mainstream," says Carney, whose former band, Jesus Christ Superfly, was the first to headline Emo's. "If these kids stick to our program for a few years, they leave with a pretty well-rounded education." 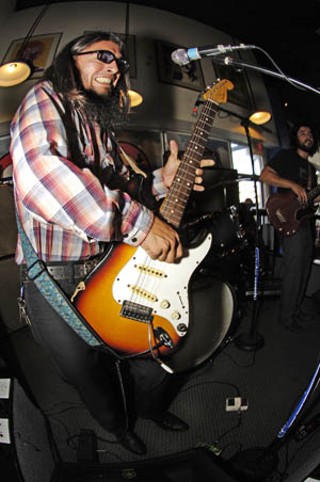 Since 5% of Tuesday's proceeds go to the Health Alliance for Austin Musicians for its second annual benefit day, OTR felt better than usual about splurging at Waterloo Records, scoring a trio of Rolling Stones reissues and a Smokey Robinson & the Miracles box set, while catching in-store performances from Josh Rouse and Amplified Heat. The night continued with the perfect pop coupling of locals Tammany Hall Machine and What Made Milwaukee Famous at the ME Television studios, concluding its daylong telethon with Charity Partners of Austin, and the still-fly sounds of Three 6 Mafia at Stubb's. Check back in the coming weeks for the full results.

Victory Grill (1104 E. 11th), the Eastside's historic Chitlin' Circuit stop, established in 1945, reopens its Victory Cafe on Saturday with its original menu and daily specials like Johnny Holmes' enchiladas. The celebration continues on Sunday with the Jeff Lofton Quintet playing the music of Miles Davis. Across town, Roux spices things up with Cajun fusion entrées below the Parish Room in what was formerly Jazz. Co-owner Dan Janjigian says the venue has no immediate plans to host shows, outside of South by Southwest, but the Parish is adding Southern Sirens, a new biweekly burlesque show, on Wednesday nights.

Program your TiVo accordingly. This weekend, Spoon appears on Saturday Night Live, hosted by Superbad's Seth Rogen. The last Austin musician to appear on the show was Willie Nelson during season 19.

Mikey Donaldson, 45, bassist for the Offenders, who reunited for a one-off gig at Emo's in March 2002, died in his sleep on Sept. 22 in Barcelona, where he had relocated from Amsterdam. A central figure of the Raul's punk scene of the early Eighties, Donaldson moved to San Francisco in 1986 with the Dicks' Gary Floyd, forming Sister Double Happiness, and also performed with MDC and DRI. Arrangements for the funeral, to take place at the Crawford-Bowers Funeral Home in his native Killeen, and an Austin memorial service are still pending.

Ever been labeled a "fanager" or openly mocked for your air-guitar technique? Sign up now for the Chronicle's inaugural least-eligible-bachelor search. For more details, check out austinchronicle.com/bacheloser.

OTR takes a much-needed break next week for the annual "Best of Austin" issue and will return Oct. 18.

Can't Hide From the Sun This week, Oct. 4-7, the eighth annual Southwest Regional Folk Alliance Conference convenes at the Wyndham Garden Hotel, home to the Austin Music Project, with seminars for nearly every aspect of the music industry. 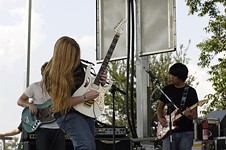