Kevin Drew, Stars, The Most Serene Republic, and Metric 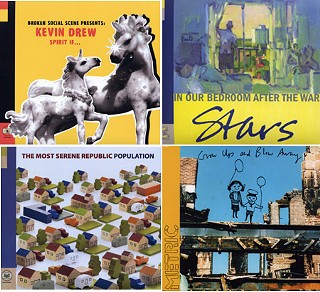 In Our Bedroom After the War (Arts & Crafts)


The Most Serene Republic

Grow Up and Blow Away (Last Gang)


Anointing Broken Social Scene the monarch of indie rock in 2003 began a domino effect. Now releasing albums through BSS imprint Arts & Crafts, the Toronto scene has become an industry. Surprisingly, of the A&C three, new venture Broken Social Scene Presents produces the least moving: Spirit If ..., Kevin Drew's solo debut. The BSS frontman gathers the clan for, well, a new BSS album, recording at Ohad Benchetrit's home over the course of two years, resulting in slapdash and, at times, jumbled musicality. There are cool reminisces (opener "Farewell to the Pressure Kids," "Safety Bricks"), but the bulk is derivative. Amy Millan and Torquil Campbell, on the other hand, gloss up third Stars disc In Our Bedroom After the War with melody. Despite the melodrama, the LP's perfectly done, every note in place. Millan works best with Campbell at her side (the triumphant title track), and on his own, Campbell is chilling and honest ("Take Me to the Riot," "Barricade"). War might be better suited for some foreign-car commercial than a political statement, but it's meticulous. Incorporating horns, odd percussion, and strings, Milton, Ontario, sevenpiece the Most Serene Republic brings familiarity to sophomore release Population with their Canadian Death Cab for Cuteness. Several tracks get lost, but others are resoundingly touching ("Present of Future End," the piano-driven "Sherry and Her Butterfly Net"). The only BSS-related album not on A&C is Grow Up and Blow Away, Metric's first recording, put to tape in 1999 and released in June on Last Gang. As a duo, Emily Haines and James Shaw are playful, their theatricality coming alive on the jazzy title track, the vulnerable "Hardwire," and soft-rock spoken-word dose "Rock Me Now." Haines, pied piper of indie rock, plays seductress to Shaw's guitar urges. Broken Social Scene, the ruling class.

(The Most Serene Republic, Kevin Drew)