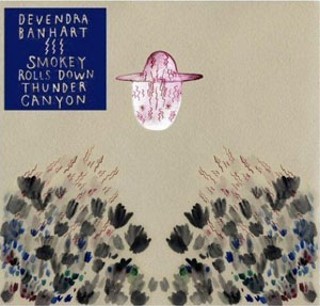 
The last time Devendra Banhart tuned in, he was the toast of "freak-folk," his Hairy Fairy Band tagged as a bizarro version of the Band. Credit the Bay Area singer-songwriter's 2005 breakthrough, Cripple Crow, recorded in upstate New York and channeling Sixties folk and psych with mostly pleasing results. Unfortunately, that hey-man-let's-just-jam approach doesn't work on album No. 5. Rolled in L.A.'s Topanga Canyon, a historical enclave for "free" spirits, Smokey checks in at 16 tracks, carries a perplexing host of guests (actor Gael García Bernal, the Black Crowes' Chris Robinson), and doesn't so much tumble as tiptoe through the tulips, then wanders off into traffic. There are highlights: Eight-minute epic "Seahorse" rides the ghost of Sixties pop that haunts the album, as does the short and sweet "Tonda Yanomaminista." Closer "My Dearest Friend" is worth the wait, but Banhart doesn't make it easy to get there. His ode to Tropicalia evolves on the ecstatic "Samba Vexillographica," and his otherworldly voice roughs up the woozy "Carmensita." He should've just made a Tropicalia album; it would've cut the unctuous fat, like the ridiculous, Elvis-aping "Shabop Shalom" ("When I'm ever in a foul mood, I gotta see you in your Talmud") and faux-gospel "Saved." His lyrics, a strength in the past (most notably on Oh Me Oh My), seem just plain tossed off, when they're in English, and he seems caught between tuning in and dropping out. (Devendra Banhart rolls into La Zona Rosa Sunday, Oct. 7.)