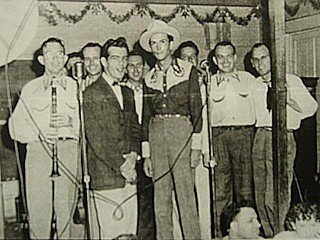 Hank Williams approached the low wooden bandstand of Austin's Skyline Club unsteadily on that crisp December night in 1952. The hired band behind him was prepared for his unpredictable state.

"Not in good shape," remembers steel player Jimmy Grabowske, who'd backed country music's lonesome drifter previously at other Central Texas venues, such as Dessau Hall. Grabowske and the band knew in advance this was likely to happen, but no one had any inkling this would be Hank Williams' last performance.

"He barely made it to the first show," continues Grabowske. "Back then, the group would start playing, and then the stars would come up for about 30 minutes. Hank made it through the first show and tried to make it through the next one. He had a difficult time, was shaking badly. [Skyline Club owner] Warren Stark had to call an ambulance, and they took him to Brackenridge Hospital.

"That was the last time I saw him."

Williams' death three weeks later at the age of 29 was a shock to Grabowske, who just the year before had played Texas Cajun legend Harry Choates' final show before his mysterious death in an Austin jail cell. And eight years later, almost exactly, Grabowske played with Johnny Horton, who drove away from his Austin gig and never made Shreveport, La., dying in a car crash. For Grabowske, a steel-guitar player of more than half a century, these tragedies are part and parcel of what's made his career remarkable.

Seated at the dining-room table of the neat North Austin home he's shared with his wife of more than 50 years, Willie, the guitarist rests his steel-picking hands atop a manila folder stuffed with brittle yellow clippings, well-thumbed copies of newspaper stories, and faded photos. At 78, his memory's sharp and his manner friendly and forthcoming, but it's no surprise that decades' worth of shows and concerts have blurred over the years. Sometimes a reminder helps.

Born and raised in Rockport, Texas, Grabowske took music lessons the way many kids did during the Depression – from a door-to-door salesman who sold instruction. By his teens, he was performing regularly, including engagements with a young female bandleader named Sue Telford. His proficiency came to the attention of San Antonio country artist Charlie Walker, who hired the steel player into his popular band. Grabowske remained with Walker until an automobile crash took the lives of two band members.

By the time he got to Austin in the late Forties, Western swing bloomed in full flower with Bob Wills & His Texas Playboys as the kings. A local guitarist with a colorful name had some local success with Jesse James & His Gang before most of the members were drafted.

After World War II, the band reformed, this time under the name Jesse James & All the Boys, which included fiddlers Sonny Raines and Joe Castle, bassist Joe Ramon, and Lefty Nason on steel. In 1948, Nason left to play with Hank Thompson, and Grabowske saddled up as the James gang's steel player. A hot young fiddler named Johnny Gimble even got into the act, albeit briefly.

That same year, Grabowske went into the studio with the band to record for Austin's Lasso label, cutting "Frankie and Johnny" b/w "You've Broken Every Vow." The group toured with Lyndon Baines Johnson during his Senate campaign, racing him to the county seat, because music brought people out to hear the politicians. Yet it was their daily performance in Austin, sponsored by Pearl Beer on KTBC radio (now KLBJ), that brought the outfit attention. 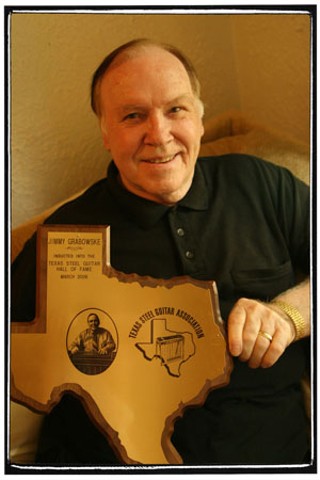 Beer companies sponsoring such radio shows profited handsomely. Not only did the talent shill the product; the companies provided stage-wear for them – matching cowboy shirts with stitching and piping and, in the case of Pearl, beautifully hand-painted silk ties for Jesse James & All the Boys. Such relationships usually came with built-in restrictions.

"We had a stipulation on the radio show that the broadcast had to be live," says Grabowske. "Wherever we played, we had to be able to drive back for the show. Every day. The farthest west I can remember going is San Angelo, Snyder, New London. South to Corpus Christi, Robstown, Three Rivers, Rusk. We had a standing engagement every Monday outside Houston. We played Dewey Groom's Longhorn Ballroom in Dallas, lots of Air Force and Army bases. [James] booked seven nights a week, so we were on the road all the time."

Grabowske left the group in the early Fifties, meeting his wife-to-be when she worked at Walgreens on Congress. He also found plenty of work as a hired hand, playing with Doug Hullum and his band the Swing Boys, among many others. Later in the decade, Grabowske took on a steel-guitar student. Once a week, the teenage boy's parents would drive him up to Austin for lessons.

"He was a sharp little boy, maybe 14, small in stature," Grabowske marveled about young Doug Sahm. "His folks would bring him from San Antone, and I gave him lessons for about a year. He could play fiddle, guitar, and was learning to play steel. He was a prodigy, just amazing."

The Fifties were a watershed era for music, the period leading up to the civil rights movement giving birth to new genres of music, particularly rock & roll, with its roots embedded in country and rhythm & blues. For all the horror stories about racism in Texas, some truly remarkable moments occurred.

Lavada Durst, KVET's popular black deejay, known to black and white audiences alike as the jive-talkin' "Dr. Hepcat," booked Doug & the Swing Boys for a "Western night" at the East End's landmark rhythm & blues venue, the Victory Grill. The regulars crowded the house that night, dressed in cowboy hats and boots and two-stepping away.

"The Swing Boys knew how to play a variety of music styles," recalls Grabowske. "There was country, Western swing, blues, and some rock songs. The folks were very friendly and didn't seem familiar with steel guitar. They stood around me, watching me play and asking questions about it. When it was closing time, they wanted us to continue playing. We couldn't because of curfew."

Jody Meredith was also a member of Hullum's band, but when Warren Stark asked him to head up a house band at the Skyline Club, it was an offer he couldn't refuse. Neither did Grabowske. He played with Jody Meredith & the Roundup Boys at the Skyline until the mid-Sixties.

By the Sixties, country-music audiences were in flux. Times were changing fast: Not only was the genre evolving into "countrypolitan"; progressive country was rearing its shaggy head. Even when Asleep at the Wheel kicked off the Western swing revival in the Seventies, it was regarded with cultish adoration and not the broad acceptance of audiences from the Forties and Fifties. The sun had set on an era.

Stepping outside for a cigarette while his wife runs to the store, Grabowske grouses about his back yard and how overgrown it is. He's a gardening nut these days but won't accept any compliments on the lushness of his plants and flowers, pooh-poohing them as untended and that maybe it's about time to take it all up for the winter. The gigs still come on a fairly regular basis, and he's got a stack of honorary certificates and plaques for things like his induction into the Texas Steel Guitar Hall of Fame that he won't let his wife put on the walls.

To look at his sweet doughboy face, eyes focused on the rose bushes along the side of his property as he takes a long draw from his cigarette, the mind reels at the thousands of shows he's played. Jimmy Grabowske is a man who's achieved enough for several lifetimes, and it's possible that at this moment in time, his distant stare is fixed on the past, when the houselights dimmed, the applause heightened, and a voice rose over a distant microphone.