The Octopus Project's 'Avalanche' of sound 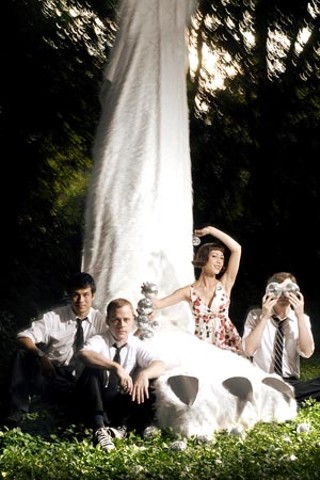 Stepping into the Octopus Project's rehearsal space at the Echo Lab in South Austin is like walking into a Tim Burton film. Amplifiers are disguised as ghostly creatures, the black walls are lined with Christmas lights and mirror fragments, and a rainbow spectrum of colored balls hangs from the ceiling alongside a frog piñata. Everything feels slightly surreal and animated as machine metal music bleeds into the room from above.

"Once in a while a song will hinge on a specific sound," says percussionist Toto Miranda, surveying the collection of toy keyboards and broken cymbals that litters the floor. "We end up stockpiling a couple of replacements because inevitably they're going to bite the dust."

One layer at a time, the Octopus Project constructs its fanciful soundscapes. Bridging the natural and mechanical, the instrumental trio explores an alternate dimension of magnetic pulses and mushroom clouds, where everyone is permanently high on helium. With the Oct. 16 release of Hello, Avalanche, the group's third full-length on local imprint Peek-a-Boo Records, the Project cascades down from its euphoric realm.

"We try to combine the best of both worlds, the impact and texture of human percussion with the impossibly perfect sonic waves of electronic machines," explains Miranda. "We tend to trade a lot of demo discs of ideas. Some of them we just don't talk about. ... There are a lot of great beginnings or things that sound interesting as a loop but can't jump that wall into a complete piece."

There's a brief pause for laughter.

"We must have at least 100 abandoned songs," furthers guitarist Josh Lambert. "Sometimes we rediscover the sounds and try to bring them back to life.

"Or we'll just leave them on the other side."

Dressed for prom in a Fifties-style pink dress and sporting her hallmark, perfectly coiffed hairdo, multi-instrumentalist Yvonne Lambert steps out from her barricade of keyboards and begins tossing handfuls of rocket balloons into a sold-out audience at Emo's in June, her near-constant glow illuminating the club and crowd like the northern lights. Within minutes, the entire outside stage area transforms into the Octopus' garden, a swaying sea of pinks, whites, and yellows pinched at the ends and hoisted into the air.

The band triggers the synth-laden introduction to Identification Parade's "Crying at the Aquarium" as Josh Lambert and auxiliary everything Ryan Figg, both in standard issue black slacks and ties, shake their fists at the audience, creating a ripple effect of chaotic motion. Everyone braces for the moment when Miranda kicks in with the drums. When it happens, the barrage of electronics becomes the soundtrack to a meteor shower of tonal colors that disperses in every direction.

"We got the idea from a travel show about Japanese baseball games," recalls Miranda. "There's a traditional point of the game where every section sets them off at the same time. We tried it again at a big outdoor show in New York, only there was so much wind that all of the balloons went sideways and left the park.

"It's a pretty cool opportunity to be in front of random groups of people all over the country," he enthuses. "It feels like something we should take advantage of to do something insane." 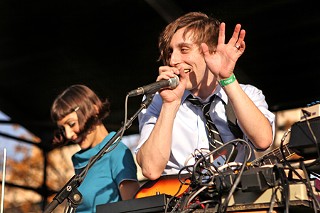 The Octopus Project has always been a visual act, its electrical current conducted through human animation, but the band's live spectacles, like those of the Flaming Lips, are unique and stimulating psychedelic experiences. "We constantly brainstorm ideas," Josh Lambert adds, "but we usually go for things that are new and exciting, easy to make, and quick to put up and take down."

Often performing as faceless characters of their own creation, hiding behind homemade masks that range from electrical outlets to half-sphere mirrors, the group's stage scenery has evolved to include speaker costumes, smoke machines, and random video images. Last summer, during the band's opening slot at Coachella, the crew handed out hundreds of small toy tambourines stamped with OP stickers and catapulted Yvonne Lambert's custom-made stuffed animals into the crowd.

"We've been building our live show for a long time," says Miranda. "Once you start figuring things out and it becomes normal, then you have to add something for it to be new and exciting. We've done it for so long now that it makes sense to us, but every once in a while, someone will look at it and say, 'What the hell?'

"The first time you see it all, it can be a little intense."

Once upon a time, the Octopus Project was performing live with its backing tracks on cassette tapes, rewinding or fast-forwarding through songs to mix up the set list.

"A lot of our early shows, things would just go horribly wrong, and we would just go with it," cringes Yvonne Lambert. "There would be these huge gaps in between songs because we had to plug and unplug things to make the song work."

Interchangeable guitarists and drummers and Radio-Television-Film majors Miranda and Josh Lambert began playing together after high school in Houston's Springhill Mind Disaster, an indie rock group that recorded, but never released, an album cut at Memphis' famed Easley McCain Studio. With the addition of Yvonne Lambert, who met her husband at his 18th birthday party and mutual enrollment at UT, the Octopus Project was birthed, but not before the ill-fated Christmas in Jail project.

"It was mostly the two of us taking our parents' Christmas collections and adding beats to it," laughs Josh Lambert. "We'd play the same Christmas carol at four different tempos at the same time as some kind of noise experiment. Of the 12 people that got it on cassette, people either loved it or hated it."

Surfacing four seasons later, Christmas on Mars slowly morphed from early demos into the group's self-recorded local debut, Identification Parade. A cosmic clash between post-rock verve and hip-hop pastiche, the album was picked up by Peek-a-Boo in 2002. "That album signifies everything we did over the first four years, compiled into one place," motions Miranda.

"It's the beginning," says Yvonne Lambert. "It's very minimal. We were all just excited to try something new."

The band's progression, hardwired into 2004's One Ten Hundred Thousand Million, could only be measured in light-years. Scrambled samples work their way into alternately ambient and epic suites, laced with acid-guitar passageways. "Between the two records, we played hundreds of shows, and we had a much clearer idea of what we wanted to do," Miranda affirms. "We started investing a lot more time and energy into things."

Last year, the local trio crossed wires with like-minded Pennsylvanian electro-pop outfit Black Moth Super Rainbow for The House of Apples and Eyeballs, digitally recycling and compacting each other's sound bites in to a carnival of beats and bleeps. "We used a lot of those good ideas that we didn't feel we could do anything with," Miranda continues. "It inspired us to expand our palette and try to go past that in the future."

The making of Hello, Avalanche started locally, some sounds predating the sessions to One Ten Hundred Thousand Million. The meditative acoustic-guitar loop in "Upmann" was recorded on a friend's porch using a laptop microphone, the same car appearing and disappearing into the distance, while Stacy Meshbane of fellow ATX instrumentalists Cue provided the majestic string arrangement that accompanies "An Evening With Rthrtha." The recording ended here, too, the band and producer Erik Wofford providing its final flourishes at Cacophony Recorders.

"Our mixing method is a lot like our songwriting process," Miranda contends. "Sounds may get completely changed or chopped up and used differently. We add bits and pieces, roughing them into the mix."

To fully realize and harness their artistic vision, the Octopus Project trekked into the evergreen forests of the Northwest. Following a 10-city West Coast tour, during which the group tested out and tightened up its new material, the trio retreated to Bear Creek Studio, a 1,750-square-foot dairy barn, built in 1900 and converted into a state-of-the-art recording facility, secluded on a 10-acre horse farm in Woodinville, Wash. There, amidst the towering pines and rural winter chill, Hello, Avalanche slowly accumulated force, sonic swells drifting against the rustic landscape.

"We actually lived in the studio," says Yvonne Lambert. "It was like camping." 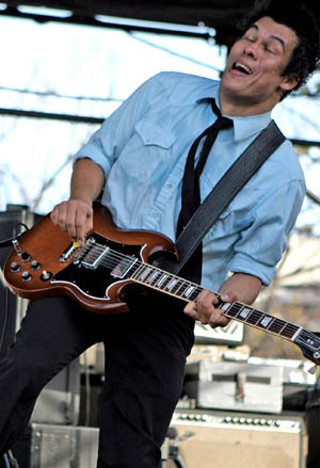 For nearly three weeks, the band culled ghosts from the machines with renowned producer Ryan Hadlock (Blonde Redhead, Stephen Malkmus), who approached the band at South by Southwest last year. "[Ryan] actually grew up in the studio, so he knows it like the back of his hand," points out Miranda. "He had a bunch of really old amps that we used to get the tiny sounds that fit really well into a big arrangement. The whole experience helped bring out ideas and clarify things."

Emerging from the mountainside, Hello, Avalanche is the summit of the Octopus Project's career thus far, each track building in sedimentary lamination to reveal a full diapason of sound and vision. Opener "Snow Tip Cap Mountain," a slowly melting glacier of xylophone and theremin, prefaces the escalading onslaught of "Truck," while the impossibly dense "Black Blizzard/Red Umbrella" crescendos into the clouds. Recorded three different ways to produce three slightly different tones, the theremin orchestra in "I Saw the Bright Shinies" provides the capstone between the ecstatic, discotheque clash of "Mmaj" and the caterwauling mount of guitars in "Vanishing Lessons" and "Exploding Snowhorse," which seamlessly fuses elements of Krautrock, psychedelia, and electronica.

"One night in the studio we all watched Explosions in the Sky play on Conan O'Brien," Josh Lambert reminiscences. "Ultimately, I think we'd like to have a national reputation like that. We're not seeking immediate success. We want to make a career out of this like Sonic Youth or the Flaming Lips, who consistently put out good albums and were gradually more known over time. We always want to be doing what excites us and moves forward."

The lights are dimmed in the Bear Creak Studio, save for a few lit candles that cast a warm, gentle ambience throughout the room. Hadlock carefully positions the three founding members of the Octopus Project around an antique microphone from the 1920s, easing their anxieties and giving each of their voices an equal presence. Then the séance begins.

They're calling up mountains to sing

Our favorite song of kings and queens.

Vermilion skies, clouds made of tea,

We ride upon their harmony.

In "Queen," the concluding chapter to Hello, Avalanche, the Octopus Project finally writes its own enchanted fairy tale, offering a lyric portal into the band's colorful mindset. It's a storybook ending to the electronic ensemble's saga, the kind that usually rolls during the credits of an archaic video game. This isn't the end, but rather another exploration of textured sound necessary for the band's continued growth. Atop a simple cycle of synthesizers, the trio almost chants its innocent poetry.

Let's wrap ourselves with silver threads,

And lay ourselves in golden beds.

Let's eat the powder in the bread,

And soon again we'll be undead.

"Now that we've done it, I personally feel a lot less weird about it," says Yvonne Lambert, waxing nostalgic.

"Like so many things in life," Miranda concludes, "all it took was a dark room and some candles.