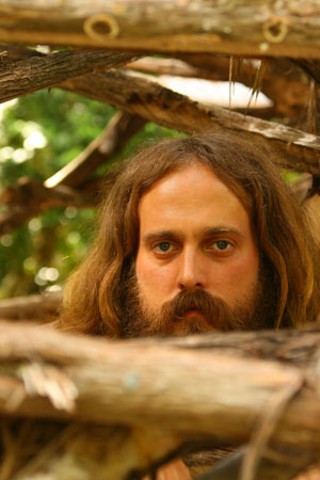 "When I sit down with pen and paper, it's usually to try and discover something that I really didn't know I could do. Instead of trying to say what I'm thinking the best way I can, it's really about throwing out phrases and combining phrases. I'm trying to find meaning out of nothing. It's a much more exploratory thing than it is trying to crystallize my thought or argue a point. That's just what I'm in to as far as writing. I like something that you can listen to one time, and you get a meaning, and then you can listen to it another time, and you discover a different meaning. It's something that has a rejuvenative quality, instead of something where if you say what you meant correctly, then they get it, and if you don't, it loses any entertainment value."

"They're just songs. You can apply different arrangements and different things to anything. The first disc was just working with what I had and trying to make the best record I could. You could do those songs like this, too, and it would sound differently. A lot of the songs that ended up on those early albums had to do with finding more peace in a situation, and with these [new songs] it wasn't really the case. These songs had, like ... a certain amount of unrest. It had this unrest, sort of a rancid old feeling, so I thought it would be appropriate to reflect it in the whole arrangements."

On making a political statement

"I'm not really interested in writing propaganda songs. That's not to say that I don't like propaganda songs. Some of my favorite songs are propaganda songs. It's just when I sit down with the paper, I find it a bit limiting. Because either you argue for your point or you don't. I rarely have a point to argue. I feel like my obligation in those terms is to vote."

On titling 'The Shepherd's Dog'

"On this record, with the name, the dog image just kept coming up. The dog thing doesn't really mean anything. But I have to be honest: A lot of the songs got included on the record just because they have a dog in them. 'Wolves (Song of the Sheperd's Dog)' deals with ideas of conscience, that sort of Jiminy Cricket idea. The dog thing doesn't really have any meaning, but it means a couple of meanings. You know the shepherd's dog can insinuate responsibility, or you could ask who's watching who, but at the same time, it's a dog. I mean you could look at it like the shepherd's bitch. That's not a very flattering thing. And who is the wolf? So, yeah, you could take it a couple of different ways."

On the abundance of birds on the new album

"It depends on which birds you're talking about, and it depends on the situation. You know borrowing from nature there are totally different connotations depending on the context. You talk about a buzzard and a songbird – they're totally different things. At the same time, you can describe a bird as like a symbol of freedom, or you can describe it as a symbol representing our failure, because they're so free, and in comparison, we're not. It depends how you spin it."

"I'm not trained in music, but I absorbed a lot of records. That's one of the good things in life – the music. I like double records like Physical Graffiti and Tusk, Exile on Main St., these kinds of things where a band you really knew stretches out. I like short, cohesive records, too. ... I grew up on the radio and with my dad's old Motown records, and I grew up in the Carolinas, so you can't get too far away from country music. And then anything after that. I was born in the Seventies and grew up in the Eighties, so I was into punk rock, skate punk, and New Wave. Anything beyond that I searched out: I always liked African music and new sounds that you don't run across every day. It's kind of all over the place, really."