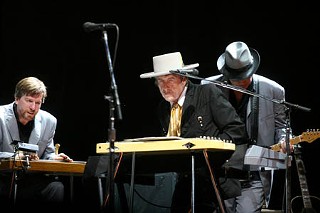 
As Bob Dylan & His Band indulged in the clatter and claptrap of Modern Times' "Thunder on the Mountain," their first encore during Sunday night's closing set of the Austin City Limits Music Festival, a roadie shuffled up behind drummer George Receli, caught his eye, and frantically ran his flattened hand back and forth across his throat. Cut. The roadie wasn't pulling a Pete Seeger at Newport; he was warning Receli that the hour was getting late, and that if any more encores were to come, the band had better move on. Still, I wanted to hug him, as I've grown to hate the No. 1-selling Modern Times, mostly because of what it has meant for Dylan the performer: more fans and fewer risks. Appeasing audiences instead of challenging them, he's fallen back on a formula of alternating interchangeable blues hammers ("Thunder on the Mountain") and speakeasy ballads ("Beyond the Horizon") as interpreted by proficient but unadventurous session men. Gone are the acoustic harmonies, riptide improvisations, bluegrass covers, and deviating sets of the late Nineties' and early 2000s' Never-Ending Tour. In their place are the likes of the lumbering "Workingman's Blues #2" off Modern Times, as exciting as a 9-to-5 day in the factory front office, and the hopelessly confused "It Ain't Me, Babe," an attempt at Dylan's "thin, wild mercury sound" of the Sixties that now evokes some bitter old rich guy eating a breakfast of gold bricks dunked in oatmeal and grinning with every bite. "Tangled Up in Blue," reworked one too many times, sounds like a sea shanty done by a particularly shitty jam band; "Watching the River Flow" would be worthless if not for the rarity of Dylan on guitar. And nothing from Time Out of Mind? Really now.

A lot of Saturday and Sunday left a lot to be desired.

But he's Bob Dylan, and we're not. After "Thunder on the Mountain" finally rumbled to a close on the AT&T stage, he and his boys – so careful not to cross him as to resemble battered children tiptoeing around their napping drunk of a father – snapped the fading, fleeing masses back to attention with "Like a Rolling Stone," itself worth any permit overtime fine. Guitarist Denny Freeman stood up to it – and his boss – just as he did to his solos all weekend, though it should be said that not too many attend Dylan shows for guitar solos. Rather, they come for moments like the ones at a buzzing Stubb's Saturday night, which found a 66-year-old Dylan breathless, lovesick, and bent on revenge. Blood on the Tracks' "You're a Big Girl Now" became its corkscrew to the heart, while the crash-landing bounce of Blonde on Blonde's "Most Likely You Go Your Way (and I'll Go Mine)" had everybody holding on for dear life, including a barking, spitting, trilling Dylan, his voice all but totaled as he tried to keep up with the band and the crowd tried to keep up with him. Some of us come for the first breeze of a Texas Saturday evening while a "Ballad of a Thin Man" harmonica break chills the spine. Others for Sunday's "Highway 61 Revisited" hitting the powers that be right between the eyes. Me, I come to hear a keyboard-driven "I Shall Be Released," the perfect song to not only close a festival as roadies converge to clear the rubble and tens of thousands of people stream out on to the streets but one to remind us who was up there singing in the first place. And that someday he won't be.

6) Spirit on the Water

8) Tangled Up in Blue

16) Thunder on the Mountain

17) All Along the Watchtower

4) Spirit on the Water

6) Tangled Up in Blue

13) Thunder on the Mountain