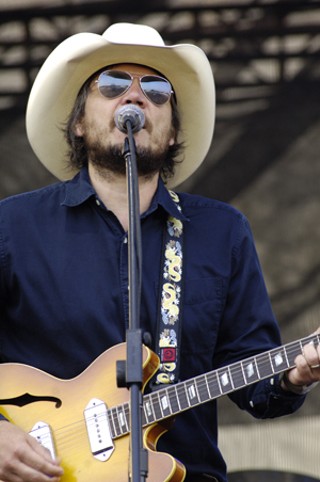 Midway through Wilco's twilight set, Jeff Tweedy quietly began an acoustic "Via Chicago," his voice barely carrying across the packed field. Suddenly, an eruption of drums and guitar crashed behind him as Glenn Kotche and Nels Cline attacked the song in a discordant, hit-and-run burst, Tweedy continuing unperturbed. It was an appropriately unsettling reminder of Wilco's experimentation even amid the more festival-friendly jams that mark their most recent Sky Blue Sky, the song finally overflowing in a sea of noise that drowned Tweedy and the roaring crowd. Though opening with new songs "You Are My Face" and "Side With the Seeds," the band drew equally from its illustrious past, including "A Shot in the Arm," "Casino Queen," "Outtasite (Outta Mind)," and "Jesus, Etc." Cline's guitar starred, from the string-strafing distortion of "I Am Trying to Break Your Heart" to woven solo on "Impossible Germany," while Tweedy's joking demeanor reflected his more relaxed attitude, which carried over to the band. A new feel for Wilco but the same exceptional unpredictability.