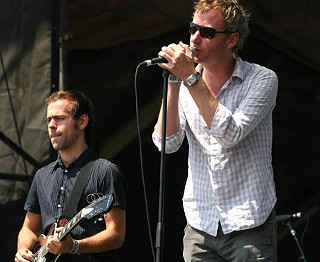 The National's 2005 breakout, Alligator, was a predatory beast, slowly gaining momentum into a critical force and culminating with this year's exceptional Boxer. The Brooklyn group's songs build along a similar trajectory, gradually swelling into an epic ferociousness. Though their tortured, conflicted anthems demand dark drunken halls, the surging crescendos of violin, guitar, and keyboards crashing over Matt Berninger's melancholic vocals projected an overwhelming power, openers "Start a War" and "Mistaken for Strangers" driving defiantly against the afternoon sun. The ebb and flow continued through "Secret Meetings" and "Brainy," the crowd pumping fists along to "Squalor Victoria," with Berninger down front pressed against the barricade howling desperately back at the band. "I'm a perfect piece of ass. ... I'm a festival; I'm a parade," the lanky blond bellowed in a sardonic, boozy snarl on "All the Wine" before dropping into the delicate, disillusioned languor of "Racing Like a Pro." "Fake Empire" brought the violin forward in a whirlwind that stormed through to closer "Mr. November." The National have arrived, with force.