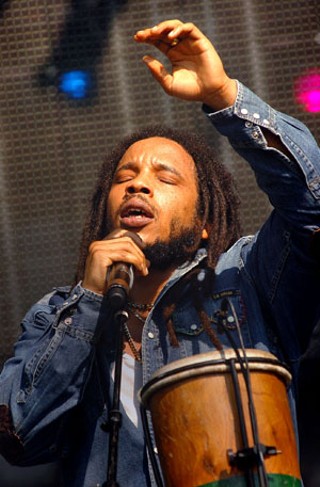 Let's face it: Most people see Bob Marley's sons perform because it's the closest thing to seeing the late reggae prophet himself. Neither Stephen nor Ziggy run from their father's enormous shadow, but they're both unique talents in their own right. Younger brother Stephen played the AT&T stage in the scorching Saturday afternoon heat, and judging from the thick clouds of hemp, the crowd was feeling irie well before the band's first note. With Stephen on guitar and percussion, the group played most of Marley's solo debut, Mind Control, resulting in an excellent set of roots reggae with splashes of hip-hop and dancehall. The crowd delighted in eerily familiar covers of Bob's "Dubby Conqueror," "No Woman No Cry," "Buffalo Soldier," and "Could You Be Loved." The good vibes continued with Ziggy on Sunday evening at a busting-at-the-seems WaMu tent. While Stephen and half-brother Damian are roots reggae for the hip-hop generation, Ziggy draws the boomer crowd. With a slew of albums under his belt, Ziggy relies less on his father's endless catalog, but "Lively Up Yourself" and "Positive Vibration" were the biggest crowd-pleasers of the night. Nothing revelatory happened at either show – depending on what was in that pipe you were smoking, naturally – but the Marley clan never fails to deliver a high.