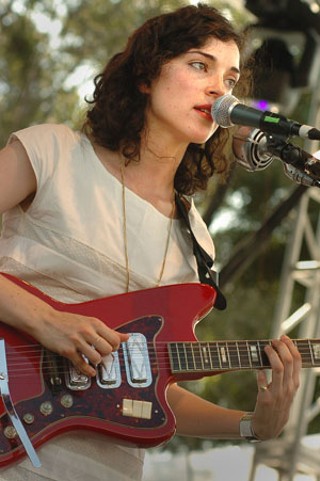 With nothing but a guitar, sampler, and two mics, Dallas' Annie Clark stood onstage just as cute as a button, a brave and ballsy one-woman band. Although not nearly as impressive as her debut, Marry Me, St. Vincent's set straddled blues, jazz, and indie rock, but none was enough to captivate the curious crowd. Clark's voice mesmerized in "Jesus Saves, I Spend," and "Now, Now" was haunting, despite the suffocating heat. Her guitar work alternated between blues riffs and spastic jerks, and after launching into a bloody version of the Beatles' "Dig a Pony," Clark hit pay dirt with new standout "My Baby Had to Go": "This song is a murder ballad that goes with nighttime," she said. "We're just gonna have to get creative." Marry Me highlight "Your Lips Are Red" got lost in the sound coming from the AT&T Blue Room stage, but Clark made up for it with "Paris Is Burning" and a quick sign-off: "Eat, drink, and be merry," she shouted. "And get married! Why not?"