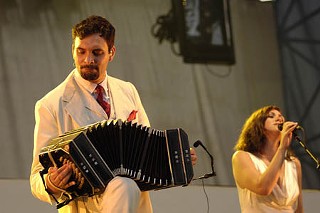 Gotan Project doesn't visit North America often, but they kicked ass in Austin, squeezing in a pre-ACL Stubb's show the night before. If anything, this burgeoned the festival faithful from crowded to packed. As the golden hour began, the big band – lady vox, string quartet, bandoneón (tango accordion), grand piano, two DJs, and guitar – launched into their hourish set, pulling mostly from last year's Lunático, 2001's La Revancha del Tango, and '04's Inspiración/Espiración. "Gotan" rearranges the word "tango," apropos for the way this Parisian outfit approaches the idiom: acoustic-electric vintage futurism. In ivory formal wear, they looked the part of a chamber orchestra, their techno tango transforming the pedestrian stage into a mythical ballroom. Low and rhythmic parts surfaced from sequencers, drum machines, and samplers, while melodic and higher timbres arose from the myriad strings, bandoneón, and achingly beautiful vocals. With dub and space elements, Thievery Corporation would be an easy association. Yet with tango hearts and Buenos Aires raps, Gotan Project is its own animal. As the crescent Ramadan moon rose over Zilker Gardens, Gotan Project's ACL audience could have easily packed a football field, a European one.