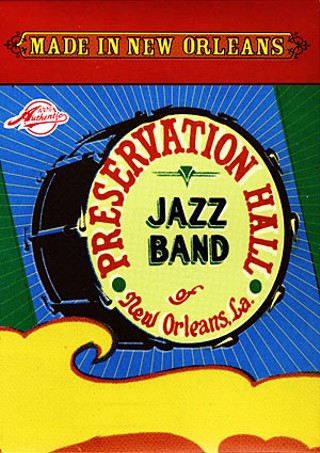 Made in New Orleans: The Hurricane Sessions (Preservation Hall)


In the liner notes of the Preservation Hall Jazz Band's post-Katrina release, impresario and bassist Benjamin Jaffe describes his search for the Crescent City collective's master tapes in the vaults of Sea-Saint Studios, astonished to find flood waters had stopped just inches from some of the band's spools. Since 1961, PHJB has been an ambassador of post-ragtime, preswing jazz – the kind of group soloing perfected by King Oliver's outfit when Louis Armstrong blew cornet. This CD/DVD box set is a message in the bottle of the band's past, with post-Katrina nuggets to prove PHJB is still kickin' it. Recorded just a few months pretorrent, the band's version of Ray Davies' "Complicated Life" is strangely prescient. The apropos "Over in the Gloryland" comes from saved master tapes, with additional vocals recorded post-flood. Likewise, standout track "Blow Wind Blow" is a combo of old and new, with timekeeper Stanton Moore (Galactic, Garage a Trois) providing funky fuel. In sum, it's an interesting hodgepodge, but attention to detail lacks. The DVD features a fascinating vintage German documentary, sans subtitles. Intriguing photos, calling cards, etc., are enclosed but appear thrown together. Post-deluge flotsam and jetsam. Hurricane Sessions ain't PHJB's best, but it's a historical document from this still-vital institution. (5:30pm, WaMu stage)