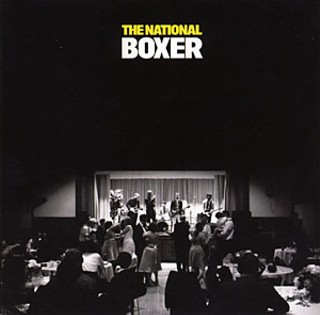 
Following the critical acclaim of 2005's Alligator, the National's fourth release leads with an imperative, tightly controlled punch. "We're half awake in a fake empire," Matt Berninger intones repeatedly on opener "Fake Empire," the hypnotic keys and drums slowly building to the guitar- and horn-laden crescendo. Berninger's deep baritone and smart lyrics linger in a somnambulant drone behind surging U2 rhythms of a dire, ruined urbanity, emerging like a bruise that only evidences pain in retrospect. Yet unlike Alligator's boozier swoon, Boxer moves with confidence, even if still willfully ambivalent in purpose. "Hold ourselves together with our arms around the stereo for hours, while it sings to itself or whatever it does," booms Berninger in an Ian Curtis monotone on "Apartment Story," half-dazed "La la la's" mirroring the song's ambiguous romanticism before swelling into a characteristic anthem. Sufjan Stevens' piano contribution backdrops the disillusion of "Racing Like a Pro," while the softly ringing guitar of "Start a War" leads Berninger's scratchy voice toward Lambchop's dark aesthetic. Though Boxer resonates in the balance of contradiction – restrained vocals against grand arrangements; heartbreak lovingly embraced; simple lines poetically rendered in cryptic non sequiturs – everything falls gracefully, perfectly in place. (1:30pm, AT&T Blue Room stage)