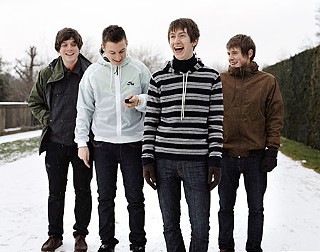 The Arctic Monkeys ran wild on the international music scene beginning January 2006 when Whatever People Say I Am, That's What I'm Not unleashed singer, guitarist, and bandleader Alex Turner's explosive suburban angst and lyrical wit. The Brit's sure-shot debut was met with an endless parade of hyperbolic praise, becoming the fastest-selling debut in UK history and pushing more copies its opening week than the rest of the Top record chart combined. The album even earned the prestigious Mercury Prize and was lauded by NME as one of the Top 5 albums of all time. At the Sheffield-based band's only performance at South by Southwest 06, Turner proclaimed more than he questioned, "I know. We're good, right?"

"That was such a long time ago," he says with an English accent thicker than a pint of Guinness. "So much has changed since then I can't really think of anything to say. It was never really stressful. I'd say it was exciting."

Fifteen months after the release of Whatever People Say, and following the departure of original bassist Andy Nicholson, the Monkeys returned with Favourite Worst Nightmare, an album even sharper and more cunning than its predecessor, thickening the grooves and adding flourishes of reverb-soaked psychedelia and rapid-fire surf rock.

"We had played a lot of shows and festivals and I think we were feeling a lot more comfortable," Turner explains. "When you're young, you discover a lot of new music constantly and there's so much out there still that we haven't heard. We were listening to Johnny Thunders and Dick Dale in the studio."

Compelled to continue writing, the Artic Monkeys are already hammering out material for their next release. "This is a pace we feel comfortable with," Turner concludes. "I have to keep going. I get bored otherwise."