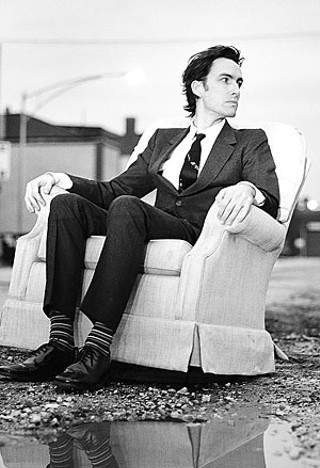 Sitting on the edge of Lisbon, Portugal, Andrew Bird looks out across the rows of apartment buildings and ships slowly steering into port. Amidst his constant touring of the past several years, the daily wash of displaced faces in airports and foreign cities has become an unfiltered barrage of unfamiliarity cascading into the Chicago-based songsmith's usual sense of wonder.

"Everywhere you go you try to be open, but sometimes it's just so much to absorb, and it starts to wear you down," says Bird, his voice tired and quiet over the phone line. "If you stay in one place, that's your universe. But when you keep changing the centers of your universe, it's just like, 'How were we ever meant to know all of this?' That's a lot to try to be open to."

That struggle of empathetic absorption pervades Bird's most recent album, Armchair Apocrypha (Fat Possum). It's also emblematic of his collaborating with drummer Martin Dosh. The two typically reclusive and self-contained artists find an intuitive musical bond on songs like "Simple X," Bird's first effort at composing his intricate lyrical wordplay over someone else's musical setting. Yet Bird's extensively looped arrangements, pitch-perfect whistling, and violin virtuosity remain the complex hallmark of his shows, even as he adjusts his more improvised sets to accommodate for larger festival performances with a solidified trio that also features guitarist Jeremy Ylvisaker.

"We have thought to ourselves after hectic festival shows that we need to kind of dumb it down a little bit," laughs Bird. "It's kind of ridiculous how many cables we have, but playing for a bunch of people draws this bizarre energy out of you. Sometimes it's just more than your body or your little instrument can bear. I only wish I could figure out how to get that on a record."