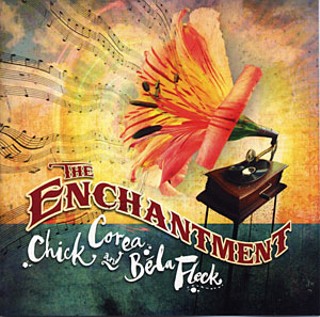 
While some might be surprised at this collaboration between renowned jazz pianist Chick Corea and banjo master Béla Fleck, the former appears on a couple of Flecktone discs, while the latter guests on Corea's Rendezvous in New York DVD. In fact, Fleck has always claimed the pianist as a major influence. After touring as a duo, the pair's Enchantment is the intriguing result. Some of the compositions veer into New Age territory that might have been prevented with a rhythm section, but there are moments of joy. As expected, Corea's material bears a Latin tinge, while Fleck's possesses a more folksy touch. Each pushes the other into new realms, and the improvisation that results, while sometimes breathtaking, is occasionally self-indulgent. Corea stretches into bluegrass territory on Fleck's shadowy "Mountain," and Fleck expresses sorrow on his happy instrument within Corea's pensive title track. The lone cover, a rapturous reworking of "Brazil," finds them in full flight and proves that the intertwining of these seemingly incongruous instruments, at least in such talented hands, should come as no surprise at all. (Béla Fleck & the Flecktones play at 2:30pm, AMD stage)