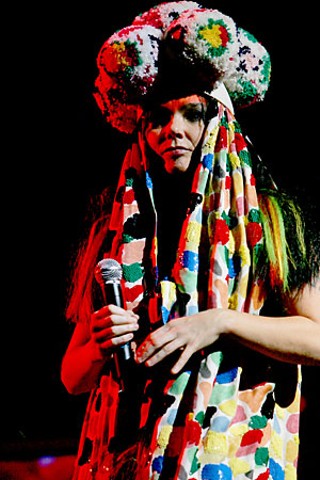 After a three-year absence, no one really expected Björk to record a feminist and political call-to-arms mashed with club beats and globe-crossing percussion. This is Björk 2007, the neon beat warrior. Volta is a sonic 180 from the Icelandic singer's last two albums, the glitch-saddled Vespertine and vocal-heavy Medúlla. Still, after 14 years, Björk's never had much interest in anything close to, say, your expectations.

"I was definitely up for some rhythm and felt I knew exactly the feeling of what I wanted but wasn't sure in the beginning how to start," she explains via e-mail. "So after a lot of experimentation, I realized what was turning me on was either quite tribal stuff or 808 and 909 [drum machines]."

"It wasn't until right at the end of making the album that I called Chris and Brian and asked them to play on top of all the songs without them having heard it before," she writes. "Footage of Lightning Bolt has been rotating amongst me and my friends for a while. Chris was more of a word-of-mouth thing in London. They come from a world of improvisation, so it came very easy for both of them.

"Emotionally, it was a return to a place where I was at my most extroverted," she adds. "So going back to the beats I was obsessed with at that time was doing something for me. I feel I added to that on Volta. Nostalgia is OK as long as it adds something, becomes a step forward."

While not Björk's most cohesive LP, Volta is undoubtedly her most politically charged. Motherhood and war make their way into the sonic melee, but it's often her "ballads" that feel the rawest. "I guess on this album I was just really up for the woman's point of view on nature, on civilization, and was tired of politics, organized religion, power obsession, and corruption, which is a man's thing," she muses. "I was zooming into the right hemisphere of the brain a bit."

Björk's live show promises something for the left brain as well. She'll have Corsano on drums, Mark Bell and Damian Taylor on electronics, and Jónas Sen on keyboards, in addition to, "Ten brass girls from Iceland," she reports. "They call themselves the Wonderbrass."