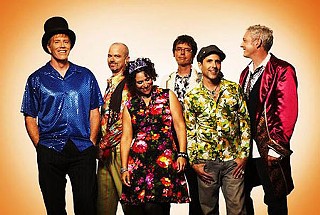 This year’s festival for the pint-sized and underaged among us has an educational bent. Gone are the hippy-dippy yoga classes and finger-painting tables. This year’s Kiddie Limits goes beyond what your kids have experienced on the fringes of Festival Beach. It’s taking your kids to the School of Rock.

Every child’s musical education begins with singing and dancing along with the performers onstage, and this year’s Kiddie Limits stage is well-stocked with players for the occasion. Local mom and folkie extraordinaire Sara Hickman, the only female act on this year’s kid stage, kicks things off Friday morning with her humorous and sensitive music for kids of all sizes. She’s followed by the BummKinn Band, a hillbilly trio that makes music for tiny Clampetts. Daddy a Go Go (stay-at-home-dad John Boydston) offers up chatty, bluesy tunes emphasizing good nutrition. Wrapping up the inaugural day’s events are Paul Green School of Rock Music All-Stars, exemplary students from the string of schools that inspired the Richard Linklater film starring Jack Black. The dudes continue their rule over the weekend, with San Francisco’s trippy Sippy Cups and their psychedelic puppet shows that leave kids jaw-dropped and enraptured. The country-fried, ecology-minded Farmer Jason (Jason Ringenberg of Jason & the Scorchers) rounds out Saturday’s bill, but watch out for that chugging tractor! Adding another element of cool to the proceedings is young rocker-cum-young dad Ben Kweller, with a late-afternoon 15-minute slot.

On Sunday morning, local wunderboys We Go to 11 show off their burgeoning Southern-rock chops for those who are awake enough to listen at that decidedly un-rock & roll hour. A fitting denouement to the Kiddie Limits experience, Ziggy Marley offers a chill-out set before passing the ... mic to Paul Green’s All-Stars. Finally, Jellydots regales the post-lunch crowd with their high-energy tunes about bicycles and other profoundly mundane things.

In between sets of grownup and kid-oriented music, the small fry can attend such workshops as Learning to Rock 101 with Paul Green and Girls Rock in a Man’s World, whose antifeminist title and the dearth of female performers are something for your daughters to discuss with cousin Autumn, a women’s-studies major visiting from Vassar. Other topics include songwriting, shredding, and rocking the rhythm section.

If your kid’s a more tactile learner and would rather touch than listen, be sure to check out the G-pod, a rock-instrument petting zoo sponsored by Gibson guitars. To look the part of a nascent Johnny Rotten or Pat Benatar, the wee ’uns can get punk rock hairdos and (temporary) tattoos.

Got a wiggle-worm in your brood? He or she might be interested in working off some of that excess energy at the various dance workshops on hand. Kick it like Run-DMC at the breakdancing workshop led by B-boys and B-girls, or get it on like Shakira in the Latin dance class. Break it down in the hip-hop workshop and John Fitzgerald’s drum circle. Having worked up an appetite, shop at the HEB’s snack shop, whose proceeds benefit Anthropos Arts, a local organization providing comprehensive music education to disadvantaged students in the Austin area. Class dismissed!