I Wanna Tell You a Story 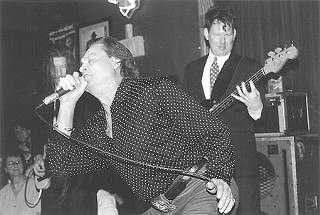 Roy Head at the Continental Club (Photo by John Carrico)

When it comes to soul-shouters, the Lone Star State rules. From Delbert McClinton to Grady Gaines, the list is big, bad, and nationwide, and Roy Head's name should be chiseled in the Top 10. Head burst onto the airwaves of radio stations across America in 1965 with "Treat Her Right," and though he's never reached that status again, his story is one every Texan oughta know.

"Treat Her Right" was a monstrous hit, the first for the San Marcos native w ho fashioned the song with his bandmate Gene Kurtz from an improv riff the band fell into while playing. Released nationally by famed Houston R&B impresario Don Robey on his Back Beat label, the song hit No. 2 on the pop and country charts, buffered from the top pop slot by the Beatles. That still chaps Head, because the song had staying power on the charts, not to mention its being reissued dozens of times over the years and covered by dozens of acts from Jerry Lee Lewis and Jesus Christ Superfly to Bob Dylan and Johnny Thunders.

At 64, Roy Head lives with his wife, Carolyn, in Humble, outside Houston, and still enjoys the glory of singing and performing when he's not bragging on his son Sundance, this year's best American Idol hopeful to get the boot. His Texas accent is thick as homemade barbecue sauce, and his sense of humor permeates nearly every subject he addresses.

"We were as poor as church mice," booms Head's voice over the phone. "And I didn't know it. I remember my mother making me a pair of shoes out of sacks with cardboard in the bottom. My father was a sharecropper and went wherever there was work, but we always had something to eat, squirrel dumplings or spinach.

"My mother worked for the spinach factory in Crystal City. I don't ever wanna eat spinach again. The first car my dad ever bought was a Dodge with a rumble seat – we were high-dollar, baby!"

Head's father found more stable work in San Marcos, and the family moved there when Roy was a freshman in high school, 1956. That was where he met the young men who would make up the Treys, the Traits' original name. Two years later, they saw their first single, "One More Time" b/w "Don't Be Blue," climb the charts of Houston's KILT to No. 5. When their second single also charted regionally, they were invited to perform on American Bandstand. The boys' parents turned it down.

Roy Head & the Traits developed a huge following around Texas and traveled every weekend as far as they could drive to perform. The Traits themselves went through numerous band members over the years, including Gene Kurtz, but Head and his schtick stayed the same. A handsome, strapping man, Head had all eyes fixed on him during the group's performances. Not only did he make the women swoon, he accompanied his shows with backflips, knee drops, floor spins, splits, and all manner of gymnastics (www.youtube.com/watch?v=_Ga4mM01SeE).

By the time "Treat Her Right" was on its way to being a hit, Head and his crew were consummate performers. Success provided them myriad opportunities to participate in package tours like Where the Action Is and perform on national TV shows like Shindig!, but the years haven't diminished Head's opinion of his rivals.

"We played the Apollo, the Regal, the Roosevelt," he recalls. "Then came the Beatles, and there wasn't a market for my kind of music. The Beatles. I've never bought one of their records, and I never will. They kept me from being Number 1. I kept thinking, 'Oh we're gonna do it,' but they came along with another song, and it scooted by us. We were up there for weeks and weeks, but they had everything. I was the only artist other than Elvis to have three records in the Top 25 at one time in that era – 'Treat Her Right,' 'Just a Little Bit,' 'Apple of My Eye.'"

Offstage, Head earned a reputation not only as a lovin' man but as a brawler with a hair-trigger temper, capable of cold-cocking a stranger on the street for the hell of it or waylaying Elvis Presley to bite him on the ankle. Head doesn't seem particularly contrite over such behavior, but neither is he ashamed. In fact, it all makes for damn good storytelling.

"Urban Cowboy came along, so I jumped on that bandwagon, country music. The line between blues and country is very thin. The stories are the same – all about love, hate, getting drunk, and screwin' around. It is. People want my kind of music back, but radio doesn't know where to go with it, and record companies have gone to hell. The record companies had everyone by the balls. When I did Grand Ole Opry, I couldn't dance and couldn't hunch, the old Elvis story. They wouldn't let me do nothing.

"There were too many politics. When I did Hee Haw, I just couldn't squat up and down in a makeshift cornfield and tell jokes that weren't even funny. I walked out on a lucrative contract and didn't record after 1986. Not that country music's boring; I love it; I'm country totally. I can skin a deer and run a trout line. I'm a country boy; I can survive."

He survived being fired by James Brown ("Yes, James Brown fired me off a show in the Sixties. I was burning his butt up. That's the story. All of it"), and once Nashville was history, so was his career. For a while. If there's one thing that's held true about Roy Head, it's that, yes, he's often been his own worst enemy, but then he's always been his own champion.

In 1991, the film The Commitments featured "Treat Her Right," and suddenly Head was hip again. Portrayed as a classic soul hit revived by a working-class Irish band, "Treat Her Right" rose from the oldies ashes like a brass-powered phoenix. The song ripped and roared, its pulsing bass, thrusting horns, and rippling guitar sounding as fresh onscreen as it did when it battled the British in 1965. Though The Commitments now sits as a period piece, the song is still an aural time bomb ticking away, waiting to explode for yet another generation.

"Sundance went on American Idol this year," says Head, his voice swelling with pride about his son. "They showed the Shindig! clip, and it brought a lot of interest back. Everyone said, 'Why don't you go back in the studio?' So I talked to my players. I'm doing an album, and it's a killer. It's blues, and it's what I do best."

'Treat Her Right': The Lyrics

By Roy Head and Gene Kurtz

I wanna tell you a story every man ought to know

If you want a little lovin' you gotta start real slow

She's gonna love you tonight,if you just treat her right

Tell her that you love her like you know you should

She'll be glad every night if you just treat her right

If you practice my method just as hard as you can

You gonna get a reputation as a lovin' man

Yeah, you'll be glad every night that youtreated her right

I wanna tell you a story every man oughta know

If you want a little lovin' you gotta start real slow

She's gonna love you tonight if you justtreat her right

I wanna squeeze her real gentle, you gotta make her feel good

Tell her that you love her like you knowyou should

10 Artists Who Have Covered 'Treat Her Right'