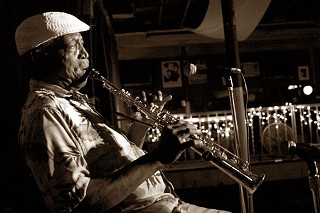 
Good thing the Victory Grill was packed the first two evenings of its three-night 62nd birthday celebration, because Spot Barnett's Sunday night set felt like a requiem for the past. Vernon "Spot" Barnett is the 71-year-old San Antonio tenor sax man who led the Revue behind Ike and Tina Turner, shared the stage with Ray Charles and James Brown, and worked with Bobby "Blue" Bland on the Chitlin' Circuit. Barnett is also one of the precious few links between San Antonio's vibrant Mexican musicians and white players like Doug Sahm and Augie Meyers. Facing a room virtually empty except for three media photographers and a handful of fans, the handsome, sharp-dressed Barnett shuffled across the riser, placed his cane on the floor, sat before the microphone, and greeted the audience. "I am Spot Barnett; welcome to the Victory Grill. This is where it began. I learned to play the blues here." He picked up his sax, its brassy finish shining copper under the red stage lights, and pulled a long, funky blues groove from it. More than ably backed by his longtime bandmates, including guitarist Francis Tolbert and bassist Elmo Durst, he played a string of sublime numbers such as King Curtis' "Soul Serenade," Percy Mayfield's "Please Send Me Someone to Love," and "Every Day I Have the Blues," which made the Victory Grill's Eva Lindsey recall with joy how her daddy taught her to dance to that song. Yet the show ended early as the nonpress audience left after the first set. Austin has a new Blues Society, and one of its aims should be to make sure shows like this don't play to empty houses. Backstage, Barnett autographed posters. Unfazed by the lack of attendance, he just shrugged. "I'm gonna play until my wheels roll off."