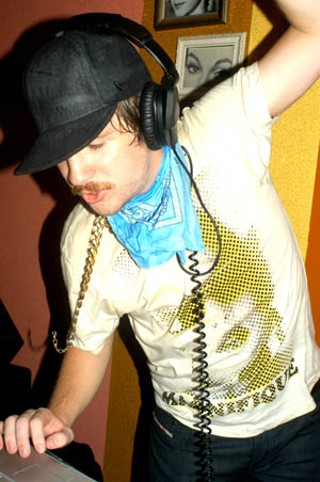 No turntables. No microphones. This is the new shit. Just point and click; adjust knobs as needed. Aside from a few new samples – most notably a reworking of the theme from Rocky and Fountains of Wayne's "Stacy's Mom" – and a couple of remixed remixes, Christopher Rose, aka Car Stereo (Wars), spun tracks straight from his debut, The Bandit, blurring the line between a CD-release show and a listening party. Pressing play on a laptop is the aural equivalent of hanging a portrait in a gallery, reducing the role of the DJ to that of the orator, who simply guides patrons through the experience. While Girl Talk, the current pre-eminent mash-up maestro, strips and pounces on his keyboard like Ben Stiller in Zoolander, Car Stereo (Wars) plays cheerleader, pumping his fist excitedly to the oft-vulgar hooks: "Face down ass up, that's the way we like to fuck." It's lip-synching for the next generation of Guitar Heroes, and, in either case, it's complete bullshit, not dissimilar from Ashlee Simpson's hoedown on Saturday Night Live. The mixes moved too quickly, transitioning before listeners could even find the beat (as if that mattered), while various samples – Third Eye Blind, the Backstreet Boys – seemed as if they were culled straight from the Now That's What I Call Music! series. The end result was like being stuck in line at the grocery store, suffocated by images of Tom Cruise, Lindsay Lohan, and the like. Pop culture overload.