The Summer of Love gets a local flashback 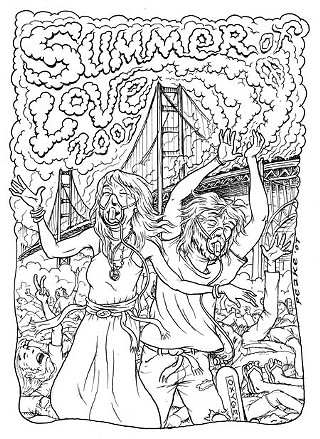 "Are you looking for that special someone?"

The clock said 3:35am, and the TV flickered with images of various soft-lit women twirling phone cords with their French-manicured fingers, flouncing around on black leather couches, and laughing demurely every five seconds.

"Have your owwwwn summer of luuuuuv," the woman's voice purred. A 900 number followed. The summer of 1967, aka the "Summer of Love," and all its gauzy images of mind-expanding freak-outs and political upheaval and groovy music and peace and love has taken a wrong turn through the park and landed ass-up in a late-night phone-sex ad. That kind of love's not so free. Forty years later, are we really that surprised?

As in 1967, we're in the middle of a messy and unpopular war, but the vibe was a little different then, and the idea of revolution more tangible. Reagan had just become governor of California, LSD was declared illegal by the government, rioters and racial tensions filled the streets of Detroit, and the Doors were censored on The Ed Sullivan Show. That same year, Joan Didion wrote the essay "Slouching Towards Bethlehem," a stark look at the counterculture and idealism in San Francisco that was already starting to border on paranoid. The opening line: "The center was not holding."

That was probably because of the drugs.

But then there was the byproduct of drugs: The music. The Doors, the Byrds, and Love in L.A., the orgiastic and prolific Laurel Canyon scene, and the Haight-Ashbury crowd in San Francisco. Andy Warhol and the Velvet Underground in New York, Stax Records in Memphis, the Beatles, Pink Floyd, and Jimi Hendrix in the UK – these places were founts of seminal albums.

So, here we are, 40 years later. What does the Summer of Love even mean now that it's being repackaged and resold for your convenience and instant nostalgia? Sept. 2 has been declared Summer of Love 40th Anniversary Day in San Francisco, with a concert slated for Golden Gate Park featuring Canned Heat, Blue Cheer, the Charlatans, and many more. Mercedes-Benz has a new "Summer Love" sales event. VH1's been holding a Summer of Love contest, the winner of which will be flown to Las Vegas to see Cirque du Soleil. Could a Starbucks Summer of Love Frappucino be next? An iSummer-of-Love pod? Oh, the horror.

Still, even if the idealism of that era has evaporated via overstimulation by the myriad entertainment outlets we now have at our disposal, the music no doubt influenced some of your favorite bands, though you wouldn't know it by most of the "popular" bands littering the current musical blandscape. Still, Austin's music scene has always been a little different.

Enter Jennifer Marchand, Ruta Maya's promoter and bartender, vinyl junkie, and coordinator of this Saturday's massive 1967 Hoot Happening. She's no stranger to hoots: She put together a Faces hoot in 2005 and a Rolling Stones hoot in 2006. After she organized this year's Led Zeppelin hoot and packed Ruta Maya – on a cold, rainy Tuesday in January no less – a booker told her she should do one every month.

"The bands were all glowing after their sets," the 37-year-old Marchand remembers. "But I said, 'You're insane.' A friend who's in radio was hanging out at the bar one night, and she said, 'You should do one for the Summer of Love,' and I thought I couldn't pass that up."

Marchand is fond of big productions like this. Before she moved to Austin in 2001 (days after 9/11 no less), she lived in L.A., where she studied theatre, or more precisely, dramaturgy. She'd also spent time in Northern California, near Santa Cruz on an alpaca ranch in the redwoods, where she lived with a "premier alpaca expert." She aspired to be a singer and figured moving to Austin might be fruitful after she was turned on to the blues.

So, this endeavor – assembling the bands, making the posters, researching – is much like a play or more precisely, dramaturgy. And Marchand has taken it on full force in addition to working the bar at Ruta Maya. A month before the show, she sits on a couch at her friend's house, combing through archival DVDs and footage from 1967 she wants to play between bands, marveling at Hendrix, smooth as silk on French TV, Blue Cheer's wall of amps, Pink Floyd's landmark 1967 concert in London where everyone was out of their minds on acid. "This here," Marchand says, gesturing to the screen as if she could grab it, "this was the beginning of the counterculture."

The feedback she got from the Zeppelin hoot was that the bands weren't onstage long enough. So this time each band plays three songs of its choosing, though not necessarily by the same artist. Her vision going into the show was something representative of the local scene. "Monterey Pop, at the time, was a showcase of the bands in the scene," she says. "Jimi Hendrix, the Mamas & the Papas, Otis, soul, rock, folk."

With the 22-band lineup comes a healthy dose of Austin's scene, 2007. Hoots in general seem to thrive here, with several already this year, including this summer's Monterey Pop tribute at Threadgill's, the Kinks, Wilco, the Police, the Who, the Flaming Lips, and Tom Waits, among others. Homage is a verb in this town.

"I think the popularity of the hoot nights can be likened to bands of the Sixties doing covers by their influences, Motown and blues," Marchand says. "These bands get off doing covers, whether it was Keith Richards pick-ing up a gui-tar after getting turned on to Chuck Berry or Jim Ortiz [of Am-plified Heat] picking up one after seeing Hendrix."

"Rock and roll as we know it today was in its infant stages back then," adds head shredder Jason Morales of frequent hooters Tia Carrera. "The ideas were fresh; the sounds were new. Superfuzzy, distorted guitars at blistering volumes had never been done before guys like Jimi Hendrix and Pete Townshend; no one had ever seen anybody play drums like John Bonham. Prior to that, music was being served up in cute little bite-size pop hits on 45s and 78s. Then along come these crazy-looking young, hairy people playing 20-minute wacked versions of old blues tunes and putting weird psychedelic gatefolds on the LP covers. It must have really blown people's minds. The whole package was supercharged by politics. I mean, it was a crazy time."

It sure was, and maybe that's why people still care. On the Happening bill, more than half of the bands borrow from the Sixties quite liberally. The Black Angels have grabbed the attention of more than a few media outlets, who compare them to the 13th Floor Elevators and the Velvet Underground, and they don't seem to disagree.

"Three of my all-time favorite albums came out that year," says Black Angels guitarist Christian Bland. "The Piper at the Gates of Dawn, The Parable of Arable Land, and The Doors. It was the height of the creative revolution in America. The Vietnam War was raging, African-Americans were fighting for their civil rights, world leaders were being assassinated, the youth no longer wanted to follow in their parents' footsteps, drugs were readily available, pot and LSD opened up people's minds to new ways of thinking. So I think all of those ingredients made for some very special albums. I don't think we've seen such prolific songwriting since then, but I think the cycle occurs every 40 years."

Out With the Old, in With the New

"Did I tell you I've been getting old hippies coming to the bar window [at Ruta Maya] singing protest songs to me trying to get a spot on the bill?"

It's two weeks before the show, word of the Happening has been getting around, and Marchand now has to turn down random folks who were actually alive in 1967. Still, she seems pleased with the attention. With her shaggy brown hair and hippie-leaning shirts, she certainly looks, as she likes to say, like the "genuine article," but she'll also spout off albums, dates, and names like all record nerds do, and she still finds that whole era viable.

"It was like the dam broke in expression," Marchand muses. "There was a real sincere potency to the music written, produced, and performed. It was so incredibly raw and pure. Think about what Hendrix did to the guitar, what Keith Moon did to the drums, the validity Aretha Franklin brought to a woman's voice, Dylan's commentary on the politicians in power.

"As a 37-year-old woman who was introduced to music purely thru AM radio, then FM and vinyl records, and then cassette, I find the current musical landscape overwhelming. I guess it comes down to being turned on to some music through simple moments in everyday life, synchronicities, as opposed to being bombarded with slick marketing by this gigantic industry out for a buck."

A week before the show, Marchand is still scrambling to find a projector to screen her mountains of footage, but that's how these things go. Then there's an ad on the radio: "Get your Summer of Love blingtones!" These are strange days, indeed.

The 1967 Hoot Happening takes place Saturday at Ruta Maya, starting at 3pm. A portion of the proceeds will benefit the Roky Erickson Trust.