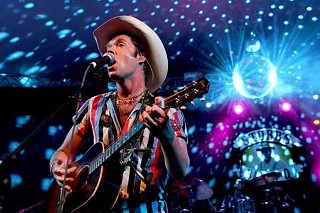 
What better way to mark the sudden onslaught of a long-delayed summer than by cramming into the Stubb's clown car, keeping heatstroke at bay with $5 Lone Stars and Rufus Wainwright? L.A.-based opener A Fine Frenzy warmed up the already populous crowd before the clock struck 8 with her maudlin piano-based love songs. A giddy Neko Case transcended an anemic backing band, mixing tunes from last year's Fox Confessor Brings the Flood with old faithfuls like "Favorite." Then it was Wainwright's turn.

The chanteur hung back in the wings while his sevenpiece band kicked things off with the cocktail-lounge swank of the title track from his latest, Release the Stars. Wainwright emerged after a few bars, clad in a red, white, and blue onesie and a borrowed cowboy hat that was more ironic than butch. The first half was heavily populated with songs from Stars, diverging into Want territory with "The Art Teacher." A return to Berlin followed with "Tiergarten" and liberal use of jazz hands. Wainwright and company closed the first set with the love-or-hate-it "Between My Legs," which featured a guest spoken-word performance from the YouTube contest winner, local drag queen Rebecca Havemeyer (get it?), who hammed it up and took it out with a bang. After a 10-minute intermission, Wainwright returned, this time in black lederhosen, and treated the crowd to a few Judy Garland tunes and lame banter about George Bush. At this point, the show's energy flagged, as overheated revelers joined the exodus that had begun during the intermission. Wainwright persevered despite the heat, pushing through the rapturous "Beautiful Child," the pensive "Not Ready to Love," and the cheeky "Slideshow." A show this long is really only suited for hardcore fans, where less-is-more would have been appropriate. But it wouldn't be Rufus if he didn't go big or go home. 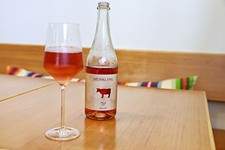