The Elephant in the Living Room 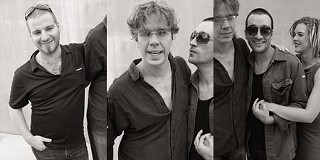 (l-r) Drummer Jeff Botta; keyboard player Stewart Cochran with Spencer Gibb; Cochran, Gibb, and Rachel Loy. The whole of 54 Seconds may be greater than the sum of its parts, but the parts are quite prolific too. (Photo by Todd V. Wolfson)

"The elephant in the living room" is one of Spencer Gibb's favorite phrases. He uses it liberally and applies it to numerous situations. It's also an apt metaphor for his life as the son of the Bee Gees' Robin Gibb.

Growing up famous comes with no guarantees, much less an instruction booklet. There's only so much DNA will do for you in a world littered with the unrealized talents of famous progeny. For Gibb, the path is no less hard, but at least he gets knowledgeable parental advice.

That's good, because as founder and creative force behind 54 Seconds, he needs it. 54 Seconds play quality pop-rock, but they've been the "next big thing" so many times, the phrase is meaningless.

Yet 54 Seconds is bouncing back, this time with their third LP, Postcards From California. The new disc delivers an unexpected punch of beautifully crafted old-school pop with modern trappings, bolstered by the talents of its individual components and a willingness to deviate from form for art's sake. Being the NBT sucks when the buzz goes bust.

The Next Next Big Thing

It's Shark Week on the Discovery Channel, and Gibb is transfixed by the flat-screen television mounted on the kitchen wall in the Hyde Park home he shares with his girlfriend, Heather.

"Incredible," he marvels. "They're 20 million years old, the only species on the planet that hasn't evolved."

It's hard not to comment on the allegory of sharks and 54 Seconds' standing as an up-and-coming band. Even the name came from a remark uttered by an English suit as he dismissed the unnamed fledgling band's demos.

"I don't like any of your fucking songs," sneers Gibb, recalling the trans-Atlantic conversation and the exec's West London accent with Python-esque accuracy. "The first song you sent me, I kinda like that, but the chorus comes in at a minute and 10 seconds. I'll tell ya, Spencer, a perfect pop-song chorus has gotta come in at 54, 55 seconds at the most."

Gibb laughs at the story. He started 54 Seconds with drummer J.J. Johnson not long after moving to Austin in 1998 from Miami. The relocation was as much escape as remedy.

"If there's anything I can say about living in Miami and doing drugs, it's that I learned to play guitar," he deadpans.

Such was his year strung out on heroin. It was balanced by his relationship with veteran New York guitarist Sturgis Nikides, who pooh-poohs the idea that he "formally taught Spen anything."

"He had real stick-to-itiveness," relates the former John Cale sideman. "I didn't want him to use his dad as his ticket."

Instead, Gibb's passage to Central Texas came courtesy of his subconscious. "I dreamed I packed all my stuff in a truck and moved to Austin. So I did. I ended my relationship and my band, packed my futon, four-track, and a couple of guitars. I got rid of everything else."

Arriving in Austin in 1997, he immediately fell in with the Steamboat stable, including Will Sexton and Johnny Goudie. Gibb rented space at the Austin Rehearsal Complex, and 54 Seconds played their first South by Southwest showcase the following year, their first buzz-band experience.

"We had all this buzz and all this press," Gibb motions. "We went to all these major labels and said, 'We've sold 5,000 copies of the record.' They'd say, 'My God, where? That's incredible.' We'd say, 'On the Internet.' They'd say, 'Oh, we don't count that.' We had receipts and statements to prove it, and they just overlooked it, trying to ignore the elephant in the living room.

"Then the elephant in the living room became Steve Jobs."

"My melancholy, Stewart's eccentricity, and Rachel's pop sense is a nice balance," he smiles.

The real elephant in Gibb's life is that he's the son of a Bee Gee. You wouldn't know it to look around his office, "where I spend all day e-mailing and harassing people," with his guitar collection hanging on the wall. Only a framed cover of Sesame Street Fever hints at the pop-royalty bloodline.

"I realized there was something different [about my family] when other kids' moms started hitting on my dad, and I started getting beaten up," he shrugs. "When somebody starts punching you in the face and singing 'Staying Alive,' you realize there's a problem."

Born in London in the early Seventies and raised in New York, Gibb's childhood was rich with musical iconography. The Bee Gees are among the most fantastically successful songwriters and recording artists of all time.

Robin Gibb was one of the fraternal twins in the three-man Bee Gees; Maurice, once married to pop singer Lulu, died in 2003. Spencer's mother, Molly, worked as the personal assistant to the Beatles' manager, Brian Epstein, until his death, at which point she became Robert Stigwood's assistant. Stigwood, the British entertainment Svengali, who managed the careers of Cream and Eric Clapton and later produced Saturday Night Fever and Grease, is Spencer's godfather. His father's youngest brother, Andy, was a pop superstar before his drug-fueled death in 1988 at age 30.

Now 34, Spencer Gibb is more than a little circumspect about how such a pop-music legacy weighs on 54 Seconds.

"You've got three camps when it comes to being famous," he explains. "One, people who don't know or care at all. Two, people that do know and expect you to sound like your father and are disappointed when you don't. Three, people who don't want you to sound like your father but look for the similarities. 'Aha! I heard vibrato!'"

In retrospect, maybe the elephant's not so big. Maybe it's a midget pachyderm easily prodded into a storage closet.

What makes Postcards From California work is the traditional definition of luck: preparation meets opportunity. Postcards is the culmination of everything Spencer Gibb brings to the table in meeting the band's realized potential. Stewart Cochran, who's played with Gibb in 54 Seconds the longest, hopes that doesn't mean another stint as an Austin buzz band.

"Label interest doesn't mean anything," he snorts. "Pin your hopes on it, and you'll get your heart broken. I gave up dreams of being a rock star. Now I just want to be a musician."

The self-taught Gibb and classically schooled Cochran held differing opinions about many aspects of Postcards' rec-ording process, including the running order of the songs.

"Sometimes," laughs Loy, "my input was to say, 'This is too long and boring! Bring it back to the catchy part, stuff you sink your teeth into.'"

Drummer Jeff Botta, who's done time playing with Gary P. Nunn, agrees: "This isn't your run of the mill rock band. It's one with good textures on their sonic palette."

Yet even in the age of iPod Shuffles, the sequence of songs was an issue.

"I assembled a running order," says Gibb, "and went to everyone and asked them to send their order. We tried them all, and it still wasn't working for me. Something was missing. So I called the one guy that would throw the pop it needed into the mix. I asked him to listen to it -- the one guy I knew would really listen -- and get back to me with a running order.

"So he called back and gave me his order. It was only one or two songs different from what we already had. That was my father."

For 54 Seconds, the feedback counted. Post-cards From California opens with gorgeous harmonies that carry its introspective melancholy. It sends notice that pop can be just as substantial as rock without compromising integrity. It could even be enough to scare off an elephant.

"People are tired of being force-fed bad art, but they don't know where to find great art or good art or, for that matter, just okay art. I'll settle for okay art," Gibb half-jokes. "For so long, 54 Seconds has been a real word-of-mouth band. It's time to move it to the next level."