The Gospel of Progress

Micah P. Hinson at the crossroads 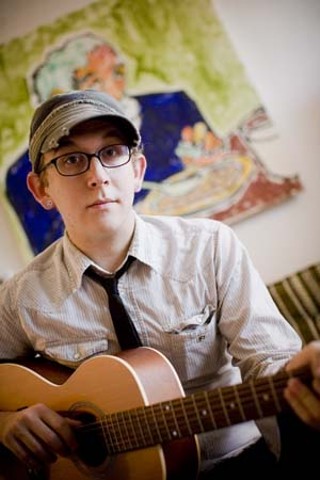 The ironies of imperfection envelop Micah P. Hinson. His roguish charm and boyish looks are tempered with an unaffected sincerity, a philosophical eloquence couched in his sarcasm and bare, biting wit. It's a tenuous balance that springs from a life that, at 27, has led the songwriter through addiction, prison, and pain and that now holds him at the point of personal resurrection.

Sitting on the couch of his new South Austin apartment, where he moved from Abilene in June, Hinson is comfortably settled: His brother's artwork adorns the walls, and a new Mac stands as the centerpiece of his home-recording setup in the corner. His left hand picks at the label of his Lone Star, while the right clasps toward his girlfriend, Ashley, beside him. His hair scrambles restlessly from under a ball cap, curling down toward the nickel-sized plugs in his earlobes.

"For me it feels like a new place, a new lease on life, and opportunity to change," he says, his West Texas drawl oddly melded with an almost Irish lilt cultivated from his extensive European touring. "It seems late, but I'm finally trying to figure out life and how to live, to become the person that I've always needed to be and never chosen to be.

"Really I'm livid with happiness. I've never been this sober in my life, and it's really nice. I thought I was going to be miserable. I really liked all my crutches, but now I'm just shedding my life of all that stuff."

Hinson's optimism is defiant in the context of the pain that still grips his body. After a friend playfully tackled him in 2005, Hinson ignored the recurring spasms in his back and continued touring until he finally had to be hospitalized to repair his tortured spine. His surgery last year was unsuccessful and left him bedridden and reliant upon the very prescription medication that he had abused and been arrested for as a teenager.

"From the time I wake to the time I go to bed, or when I wake up in the middle of the night, it constantly hurts," he admits, sitting stiff with a pillow propped behind his back. "Except when I take the pills, and that doesn't kill it for that long because I've refused to take too many; I'm not going down that path. But it just never fucking stops."

'The Day Texas Sank to the Bottom of the Sea'

Hinson's songs absorb a solemn beauty, his low, dusky voice imbuing a worn hopefulness into quietly lush arrangements, what he calls an "epic lo-fi-ness." Although his debut, Micah P. Hinson and the Gospel of Progress, was released in 2005, the album collected much earlier recordings, introducing the songwriter within the wavering uncertainty of devotion and doubt, from the hushed resolution of "The Nothing" to the brutally caustic "Patience." The unflinchingly poetic lyricism swelling against a blanket of insecurity, aching and graceful in its yearning, became a hallmark of his songwriting.

Raised in the fundamentalist Church of Christ, Hinson eschewed his parents' religion at an early age. He and his older brother, Joshua, began experimenting with drugs, smoking weed and dropping LSD, and Micah was eventually expelled from the private Christian high school in which he was enrolled.

"I mean, I had thigh-highs on my arms and the big Robert Smith hair; I'd wear skirts and stuff," he laughs now. "That didn't go over real well in Abilene."

By 2000, youthful indulgence escalated to addiction and trouble with the law. While attending Abilene Christian University, where his father is a professor of psychology, Hinson began dating a model several years older than him, the two feeding their destructive relationship with pills and drugs.

"We got kicked out of the university and were living in all these little dumps around ACU," he recounts. "She was on Valium because her husband had just died of an overdose, pills and cocaine. I lost the majority of all my friends, the majority of all my family, and when everything was done and she wasn't able to use me for anything or I wasn't willing to be used, she just decided to fuck off."

After being arrested for forging prescriptions, Hinson found himself bankrupt and homeless, his possessions, including his instruments and recording equipment, seized by the police.

"That's when I learned that nothing would change unless I wanted it to change," he reflects. "I always thought that somehow it would be all right, no matter how much I fucked up my life, but then I realized that I'm the only person that can really save myself from these things."

With help from John Mark Lapham and Brandon Carr of Texan/UK psychedelic popsters the Earlies, Hinson recommitted to his music. The Gospel of Progress garnered critical acclaim, followed by another collection of his earlier work, The Baby & the Satellite. Yet just as Hinson's career was beginning to take hold, his back injury returned him to the point he had fought to escape: a cheap, ramshackle house rented on the edge of Abilene and a diet of codeine, Soma, and Xanax.

Confined to his bed last summer, Hinson gathered musicians around him to begin recording. Austinite Nick Phelps contributed a delicate base of banjo and sitar, while Eric Bachmann of Crooked Fingers and Archers of Loaf prepared extravagant string and horn arrangements.

The result was last fall's jestingly titled Micah P. Hinson and the Opera Circuit, an album that swoons under the weight of pain and isolation. A dark haze drifts across the songs, Hinson's deep voice characteristically encompassing both defiance and disillusion. The circumstances surrounding the album also served as a catalyst for Hinson's acceptance of his upbringing and faith.

"With everything I've been through, there's clearly someone, something that was watching out for me, watching my ass," he posits. "It's only by grace that I'm not in jail or out on the streets just shit-faced out of my mind. I just put myself in stupid positions and was just a stupid boy. I still struggle with being a boy, but I finally have an idea that it's time to face up to things I've done in my life and live in a manner now that won't have to reflect those things."

Although his constant touring has been curbed to mend his back, hopefully without resorting to another surgery, Hinson is working on a new album, which he promises will be even more elaborate than his previous works. He's also working with Lapham on their side project, the Late Cord (see "The Late Cord" p.59).

"This record seems to be mostly songs that I've written lately," Hinson offers. "That's a conscious thing, writing new songs that talk about where I am now, which I think is a bit more mature."

As he surveys his apartment, glancing at the Star Wars figures atop his computer and pointing out the carefully ordered shelf of sheathed comic books against the wall, he adds an almost winking caveat.

"It's not like I'm a mature human being now, by any means," he grins. "You can't grow up too quick. You can't forget that stuff. It's important."