Tweet
print
write a letter
Because Valerie Aiello didn't want babies on the covers of the Rockabye Baby! series, all 20 of the CDs sport cover art and marketing copy that reference the band's music and iconography, with varying degrees of success. Some are humorous, some are awesome, and some are just lame. 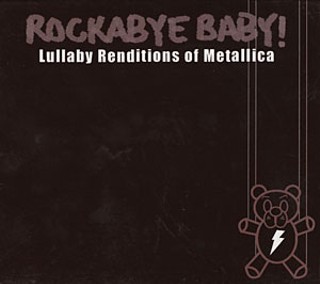 An angry bear hangs from puppet strings and sports a white lightning bolt on his tummy. The copy reads, "Say your prayers little one. Tonight the sandman will be gently rocking you to sleep with these essential masterpieces of rock & roll." A successful defanging of Metallica's rhetorical bite.

Pink balloons in the shape of pigs' heads float across the cover, a cheeky reference to the giant pig balloon used on the cover of the band's 1977 release, Animals. The copy reads, "While your child is comfortably sleeping ... your crazy little diamond is going to shine on in a dreamland." Yeouch.

According to my old-fart, reformed-hippie dad, "When Led Zep started their own label, the icon was an angel spreading its wings. This looks like a child's rendition of that icon." Awesome. Points for obscurity, which counteracts the painful question posed on the back: "Hasn't it been a long time since your baby rock & rolled?"

A teddy bear wearing an army helmet apes the cover of the Irish rockers' first Best Of compilation. The art department could have really knocked this one out of the park if they had invoked the silhouetted figure of the Edge from the cover of Rattle and Hum.

A teddy-bear version of the graphic color blocks from the cover of X&Y. Yawn. Better: a teddy bear hunched over a piano, with "Save Darfur" scrawled on his wee paw. Bonus points for a Gwyneth Paltrow bear with two baby bears in tow, just offstage.