The night is a sweatbox. It's late July, 2006, and there's a throwdown happening at a showplace home in Rollingwood, a section of Austin just west of Downtown. The ultramodern kitchen is bigger than most apartments, and in the back is a low-lit grotto that accommodates an exquisitely tempting swimming pool.

Folks have gathered to celebrate Barb Prashner's birthday. She's the fortysomething leader of a fan group called the Funkybatz, a local crew with a special affinity for the swampy sounds of New Orleans, the Texas soul/blues scene, and the improvisational daring that jam bands offer. Performing within the stone walls of the living room is one of Funkybatz's favorites, Topaz McGarrigle, whose merry band of musical funkateers offers superlative improvisational chops and one sly groove after another. The setting, the sounds, the people all add up to the party of the year.

Born and raised in the Hill Country, McGarrigle fell in love with the saxophone after his mother dragged him to see Houston-based Kirk Whalum play one night on Sixth Street in the early Eighties. Later, when a curfew was imposed Downtown, he wrote a letter to the Chronicle complaining about its fairness.

"It went something like, 'I wanna go down to Sixth Street with my mom and play my sax,'" he recalls with a distinctive laugh.

Two decades later, Topaz the group blazes, and serendipitously or not, a scene has sprung up around them.

As a youngster, McGarrigle traveled to London, where he discovered the burgeoning acid-jazz scene. As a teenager, he moved to Washington, D.C., where he attended the Duke Ellington School of the Arts for jazz, started his first band, and began his recording career with Eric Hilton of Thievery Corporation. Next it was on to New York City to attend NYU in the mid-Nineties, the saxman making his mark there with a series of bands and signing with Velour Recordings, which put out two discs of soul and funk. In 2005, he returned to Austin. 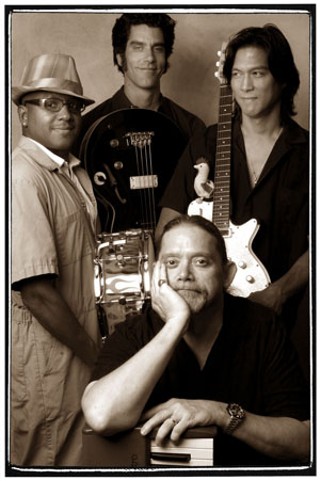 "I got sick of New York, and musically I wanted to get back to my Texas roots," he says through brown locks, a full beard, and piercing eyes, all of which bring to mind Jesus Christ and/or Jim Morrison.

"He was my only connection when I got here," recalls the normally first-name-only Topaz. "Through him I met the guys that formed my band."

They kicked off a Thursday night residency at the Velvet Spade that grew into the place to dance your way into the weekend. Unfortunately, when the club became the Mohawk, Topaz was unceremoniously dumped, and re-creating that energy in other venues has been trying. "I think there's a hunger for the experimental part of what I do, the improvisational part of it," claims the bandleader. "But a lot of what goes on in Austin is safe these days. It's not really pushing boundaries."

Around that same time in 2005, Andrew Trube and Anthony Farrell -- Greyhounds -- moved to Austin from the opposite coast. They brought with them their own sound, but one with similarities to what Topaz generates. Based on old-school R&B, it incorporates elements of funk, blues, Seventies boogie, and the occasional noodling. With Trube, originally from Tyler, on guitar and Farrell on keys, Greyhounds bring to mind the organ jazz of the late, great Jimmy Smith.

"It's not jazz," explains Farrell. "Not really. It's funk and blues."

"It's what we each bring to the table," Trube adds. "He brings the hip-hop and R&B stuff from growing up in L.A. I bring the blues, funky, soulful shit. I like to say we're like Hall & Oates meets ZZ Top."

Well-known nationally because of their early involvement with JamBase.com and heavy touring schedule, the Greyhounds remain regulars at Ruta Maya, Antone's, the Parish, Stubb's, and Lamberts. They also have a Wednesday residency upstairs in the gallery at the Continental Club, billed as Trube, Farrell & Sniz, because the band's regular drummer doesn't live in Austin. With Dave "Sniz" Robinson, who's kept time with Topaz, Papa Mali, and Scrappy Jud Newcomb, among a long list of others, TFF works up relatively obscure soul-jazz covers and made-up-on-the-spot jams that often find the act joined by one of the multitude of players that make up this burgeoning scene.

"I think there's a lot of people that are into our style," Trube claims, "but they don't realize that there are bands playing it, because a lot of the hipsters are afraid of it. They think, 'That's a jam-ass hippie band. We don't want to go and see them.' What's cool about the Continental is that everybody goes there. We'd like for people to just dig the music and forget about the scene."

The best thing to happen to the Greyhounds because of the Gallery gig was being chosen to open for American Idol Taylor Hicks earlier this year.

"He saw us at the Continental and was all about it," nods Trube. "The tour was a trip. It was mainly women in their 40s and their significant others."

"The old guys were the people that latched onto us," Farrell chimes in.

"It was really wild," continues Trube, "because those were the kind of people that would never have seen us, and they ended up loving it."

The tour was so successful that they sold all the CDs, a bonus in that they're gnawing at the leash to record a new one.

"We've got enough songs to make a Pink Floyd box set," Trube alleges. "My laptop is filled. We've been approached about doing a live record at the Gallery, but it switched gears, and now it looks like another studio record. That's why we moved here. We were so sick of touring we wanted to record. Now, we're just gonna do our thing, and if it works out, it works out. We're just gonna do our thing."

But Can You Eat Dinner to It?

Last year, Topaz McGarrigle decided he wanted to take his music in a different direction, away from endless solos and into heavier blues with vocals. Think along the lines of the North Mississippi Allstars. To accomplish this, he let his band go and found different players. The result was Chicken Strut.

"It's a Southern thing in regards to what some people might think is funk," Sio declares. "We're not P-Funk. We're not James Brown. We're a hybrid."

Perkins recalls that when Topaz decided that he wanted to play with other musicians, they all decided they enjoyed their musical relationship too much to let it go. For the past three months they've held down the Tuesday night midnight slot at the Continental, complementing Mike Barfield's joyous James Brown tribute.

"There's not a lot of stuff we're covering that's very modern: the Meters, the Gaturs, David Baptiste, Grant Green," ticks off Pederson, who's particularly notable in the new scene for his involvement in Extreme Heat, an Austin funk act from the Seventies and Eighties that's still spoken about in reverential tones. Chicken Strut's adventurousness is simple, laughs Pederson. "Everybody's game as hell. 'You wanna play what? OK, what key? Hum a few bars.'"

They still play with Topaz on occasion, with a regularly scheduled gig the last Sunday of the month at Güero's. "We're all friends," Sio states. "It's kind of a mutual admiration society."

The newest band on the scene, and the one with the most potential, is Uncle Bruno. A quintet led by saxman Damon Garcia, they take their cues from national acts like Galactic and Karl Denson.

"Can it be considered jazz?" asks Garcia, doing his best Donald Rumsfeld impersonation. "Sure. Is it something you want to eat dinner to? Probably not. Our sound is the funky, second-line sound that comes out of New Orleans but with rock and blues in the background."

One of the reasons Garcia moved to Central Texas from Pascagoula, Miss., was the ability to play soccer year-round. This led to Fadó, the fútbol-friendly Irish bar on Fourth Street, where he met some kindred souls who offered their stage for regular Thursday night gigs. Topaz also helped out Garcia early on.

"He did a lot for me in this town when I first moved here," acknowledges the futbolista. "I got to play with him at the Velvet Spade when that was happening, and it gave me a lot of contacts. There's been times when I'm onstage with him and I find myself watching and trying to take notes while I'm playing."

Like the rest of the bands in this funky roundup, Garcia's Uncle Bruno doesn't have any officially recorded music yet but is planning on recording in July with hopes for a September release. And that's the thing. Except for some hard-to-find discs and a few tracks on MySpace.com, this music must be experienced live. Each act has a different reason for the lack of recordings, but it isn't for lack of ambition. There's a core of extremely talented musicians doing something exciting even if it's rooted in music that's decades old. The spontaneity of it, the changing rhythms, and the cheerful nature of the people making it and dancing to it are difficult to resist.

Nationally, Galactic, Karl Denson, and Maceo Parker are mentioned by the locals as influences. All draw their audiences from the jam-band crowd, where improvisation and danceabilty are idolized. Whether Topaz, Greyhounds, or anyone else can break through to similar popularity is questionable considering the meager, but growing, audiences they now draw. There have been pockets of funk throughout Austin music history, from Extreme Heat and Papa Mali's Instigators to Bad Mutha Goose, whose popularity waned over time. Will this group travel that route? It's too early to tell.

Either way, Papa Mali gives the whole thing his blessing.

"I think it's great that there's a developing scene for it," enthuses Austin's Godfather of Funk. "The clubs are supporting it. Believe me, they're all killer musicians. Funk is a genre that really depends on people that can play on their feet. The whole idea is to set up a hypnotic groove. That's the thing that James Brown started, but if you don't make it interesting, it can get tired quick. All those guys are really great players."

FunkFest II grooves Austin July 27-29: Friday at the Parish and Saturday/Sunday at La Zona Rosa. See "It's Too Funky in Here," below, for full details.