Keep Reachin' Up (Light in the Attic) 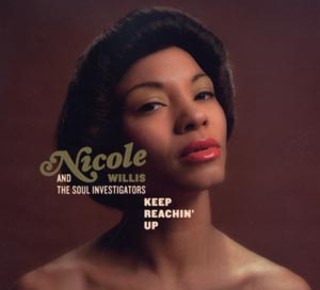 Keep Reachin' Up (Light in the Attic)

It's hard not to float back into the shadows of Motown after staring at the soft-lit cover photo of Nicole Willis, eyes come-hither, skin aglow. Even after the album's second track, "If This Ain't Love (Don't Know What Is)," slaps you back into 2007. The Brooklyn-born Willis makes her first appearance with the Finnish ninepiece Soul Investigators, who do some funky mining on their third album, Keep Reachin' Up, released stateside two years after its European debut by Seattle's Light in the Attic. The Supreme "My Four Leaf Clover," funky brass of "A Perfect Kind of Love," complete with a white-hot organ breakdown, and late-night Seventies swoon of "No One's Gonna Love You" connect Detroit and Lapland in the here and now. Like Sharon Jones & the Dap-Kings, the group does "retro-soul" up right, right down to the hand claps and shoop-shoops of "Invisible Man." Vintage soul with a new millennial coat of paint.