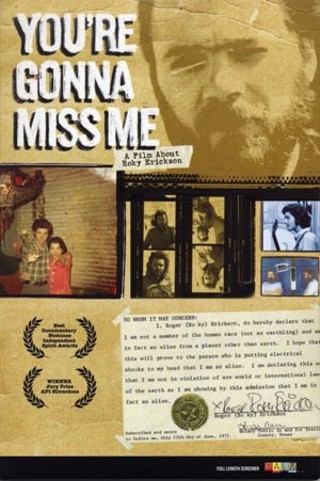 Ever so subtly does Roky Erickson's music of the spheres gradually recede during You're Gonna Miss Me. Considering that three generations of the rock & roll literate still haven't flashed back to 1966's The Psychedelic Sounds of the 13th Floor Elevators, Austin-born and inner-space bound, that might be problematic. "You're Gonna Miss Me," barked by Erickson leading the 'Vators on Dick Clark's American Bandstand that same year, seen here in ancient black-and-white, cooks up immediately habit-forming. Tommy Hall's electric jug gurgles and swoops as the band's bluesy fray rattles the soundstage. They could be any contemporary indie band possessed of perfect chemistry and a third eye, only there wasn't any such beast until this Texas contingent stomped Pandora's music box. "Slip Inside This House," "You Don't Love Me Yet," and "She Lives (In a Time of Her Own)" materialize early in Keven McAlester's 94-minute rock doc, as does salivary-gland footage from ACTV-Austin, 1979, Erickson on camera glowing about Little Richard and James Brown. Erickson, 1983, solo, acoustic, and facing a decade of relative catatonia, pierces the camera with a charisma straight out of Jesus Christ Superstar. A 1975 audio snippet of the singer describing his five-year nightmare in Rusk State Hospital thanks to a 1968 insanity plea over one lone marijuana cigarette, plays equally jaw-dropping. As You're Gonna Miss Me unravels into Erickson family dysfunction, recalling the Flaming Lips' Fearless Freaks and The Devil and Daniel Johnston, footage of beat-down Roky dottering through his Austin digs dominates where earlier testimony by Patti Smith and Thurston Moore, and later the singer's spoken word piece could use siblings. That's when "Goodbye Sweet Dreams," Roky Erickson's happy (and ongoing) ending, humbly walks on water. (You're Gonna Miss Me screens at the Paramount Theatre Friday, July 13, followed by a live performance from Roky Erickson & the Explosives.)