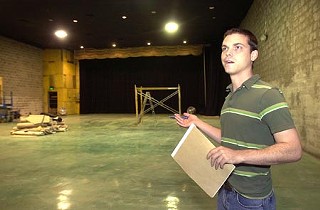 No sooner had the needle dropped on the inaugural "Off the Record" than the Chronicle switchboard lit up. Transmission Entertainment, the new event-promotion venture comprising former Emo's head talent buyer Graham Williams, Mohawk owner James Moody, Club de Ville proprietor and Lamberts partner Michael Terrazas, and Super!Alright!'s Chris Butler, won't be working with Beerland, whose booking continues to be handled by owner Randall Stockton and Max Dropout. Nor does Transmission have an exclusive arrangement with Direct Events' La Zona Rosa, though the company likely will work with the venue at some point as an outside promoter. And Emo's has called off its search for a national booker, now working solely with C3 Presents.

Following the renovations announced last week by both Mohawk and Club de Ville, as well as those proclaimed by Stubb's late last year, the elephants in the Red River Entertainment District remain residential towers like Red River Flats, a four-story, 124-unit condominium complex scheduled to be completed next year, which may lead to a rezoning of the area and will undoubtedly exacerbate noise-ordinance issues. "Everyone is aware of the potential for conflict," says Michael Knox, staff liaison to the Downtown Commission, "but no one has really thought of a solution yet." According to Knox, consultants should have recommendations ready by the end of October, which could include additional soundproofing required by builders and/or venues. Both C3 Presents and Transmission Entertainment declined to comment on the situation.

Meanwhile, uptown, in the Lincoln Village complex between I-35 and Highland Mall, the Monarch Event Center is gearing up for its grand opening Friday. The 18,000-square-foot facility has been under extensive reconstruction since February, transforming the old Lincoln 6 Theatre into four separate multimedia rooms, including a lounge with a full bar and a multipurpose hall. The screening room, opening in July and expected to seat around 300 people, is being remodeled in a fashion comparable to that of Alamo Drafthouse, with a small stage and tables for outside catering. The large auditorium, which resembles a smaller Austin Music Hall, has been configured to hold 750 people, a figure that falls nicely between the capacities at the outdoor stages of Mohawk and Emo's.

While the center will occasionally host its own events, promotion will rest on outside renters, who can book the rooms individually or as a package deal for one to eight hours. Its powers that be hope to become involved with South by Southwest and the Austin Film Festival. "This opening will be a test and a testament," says director of events Brett Hornsby. "It's going to show us and everyone who attends what we can do with this place." Friday's festivities will include performances by New Orleans' Soul Rebels Brass Band, Lannaya African Drum and Dance Ensemble, and Beto & the Fairlanes, with DJ Mel spinning all night long, and are free to the general public with a donation of two canned goods for the Capital Area Food Bank.

Time has taken its toll on the Weary Boys. The insurgent local bluegrass outfit will disband at summer's end, citing fatigue as a primary determinant. "We put a lot of miles on a couple of vans," chuckles guitarist Darren Hoff from Baton Rouge, La. "We're still getting a great turnout, but we wanted to end it while it was still fun." Word spread like wildfire of the Boys' cantankerous live performances and bloodshot approach to roots music, moving from street corners to weekly residency at the Continental Club in less than a year after relocating from Humboldt County in California in 2000. Following the success of his stark solo debut, Hard Luck Hittin', last year, guitarist and vocalist Mario Matteoli left the group in January. "It feels like I'm starting all over again," says Matteoli, who returns to the Continental on Wednesday backed by a threepiece. "I'd like to find a record label to put out my next album, but right now I'm just trying to get people to remember my damn name." The remaining Weary Boys saddled up one last time, adding 18-year-old banjo picker Matt Downing to the mix and recording their sixth and final LP, Coalinga, which gets released this weekend accompanied by a two-night stand at the Continental, with Big Smith on Friday and Scott Biram on Saturday. The band hits the trails this summer, including a four-night stand at the Fortune Valley Hotel and Casino in Colorado and a performance at the Pickathon Roots Music Festival in Oregon alongside Dale Watson and the Gourds, before hanging their hats up at the Continental Club on Aug. 25.

I Have Always Been Here Before

The closing scene of the intensely intimate new Roky Erickson documentary, You're Gonna Miss Me (see "Texas Platters"), paints an unsettling picture of the future for the legendary 13th Floor Elevators' frontman, as the ghosts and noise of his painful past slowly begin to seep into the green walls of the home of his brother and caretaker at the time, Sumner. "The dissatisfaction you're feeling is intended," assures director Keven McAlester, who shot the film from July 1999 to June 2002. "The documentary is an attempt to address the fundamental question of what happened to him without ever settling on a definite answer. There are a number of possibilities, but nothing really adds up. The present slowly takes over the film, and in the end, the idea of him playing music again is there, but it hasn't been realized yet." Just days after the rough-cut premiere of the film at SXSW 05, Erickson performed three songs at Threadgill's, his midnight howl alive and well. Within months he was playing the Austin City Limits Music Festival, an event chronicled by Kyle Ellison in a 15-minute documentary included in the video's bonus features, along with footage of Erickson's emancipation hearing, deleted scenes, and rare acoustic recordings captured by Erickson's mother, Evelyn. The question now: What's next? The Sixties acid-rock survivor has already surpassed all expectations, recently returning from a successful stint on the European festival circuit. "We had a packed house," exudes Erickson from Denmark following his appearance at the Roskilde Festival. "The crowd kept on singing along to 'The Wind and More' after we finished." Erickson plans to record a new album with ZZ Top guitarist Billy Gibbons and will celebrate his 60th birthday Friday night at the Paramount Theatre with a screening of the award-winning documentary plus a full concert by Erickson & the Explosives. Tickets range from $25 to $36; the more expensive ticket includes a copy of the accompanying soundtrack released last Tuesday.

• YouTube saved the video star. Selections for the sixth annual Indie Music Video Festival were announced this week; among them were Beta Valentine's animated "Curse of the Midnight Idol," created by J. Conway of Pushingnormal, and the Octopus Project's "Music Is Happiness," by local director Nick Smith, who's also worked with the Flaming Lips and the Deathray Davies. The touring, one-night program stops in Austin at the Alamo Drafthouse sometime in September.

• Refunds for Friday's canceled Widespread Panic performance at the Backyard, originally billed as "rain or shine," are available until Sept. 7, by calling GetTix, 866/443-8849.

• Those who missed out on the dual taping of Ghostland Observatory and the Decemberists on Tuesday at the Austin City Limits studio can still catch Afrobeat phenom Femi Kuti on Sunday. Call the ACL hotline at 475-9077 to get the scoop on how to acquire space-available tickets to the session.