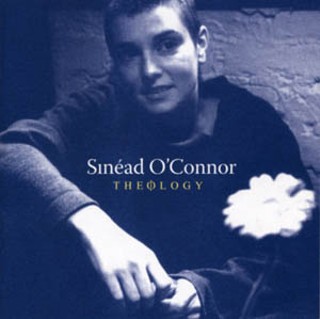 "Jerusalem," an unholy synthesis of steel strings, shrieking in tongues, and religious repression off 1987 Sinéad O'Connor debut The Lion and the Cobra, comes full-circle on Theology. Twice. Unplugged, Éire-y, the devout Dubliner's hometown acoustic edit yields nine self-penned songs of devotion à la the Blood of Christ, full-bodied and warm. Didactic. London and rhythm section bound, disc two revisits Cobra's machine-made beats and studio sterility. It's a tale of two cities that was better off reaching an accord for a single CD. The UK treatment of Curtis Mayfield's "We People Who Are Darker Than Blue" clacks, but the stripped version achieves a measure of raw shading. Andrew Lloyd Webber's "I Don't Know How to Love Him" recalls Madonna's "Don't Cry for Me Argentina" yet begs for an orchestral sweep, not studio cheats. Closing standard "Rivers of Babylon" drowns in backing but slays solo. The covers almost have it, O'Connor born darker than blue as a clairvoyant interpreter, save a few blessed alternates. "Dark I Am Yet Lovely," the quintessential all-is-forgiven track on which the singer's spreading hush immobilizes all, loses out at lower wattage, but nearly wasted metaphor "If You Had a Vineyard" blossoms in lower light. "Whomsoever Dwells" and first spiritual "Something Beautiful" swing both ways, equally righteous, but then so does the two-times terrifying "Watcher of Men," writhing, wondering, "Why did I not die at birth?" Saints preserve us.