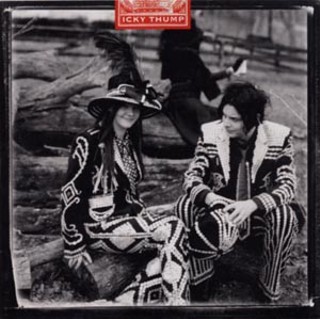 There are two guarantees with each new White Stripes disc: The dynamic duo will put their best foot forward, then close with something better left on the cutting-room floor. On Icky Thump, their sixth LP and Warner Bros. debut, recorded at Nashville, Tenn.'s Blackbird Studio, the title track erupts like a "Seven Nation Army." Jack White's electric-guitar squall ricochets off a Wurlitzer organ, creating a kaleidoscope effect akin to the Beatles' "Tomorrow Never Knows," over which the singer rants hysterically in both channels. On the other end, the bitter last impression, "Effect and Cause," rolls out an acoustic, Dylan-esque ditty. The rest is a mixed bag. White wields his axe like a matador flourishes a red cape in his duel with Regulo Aldama's trumpet on "Conquest," a flamenco-infused cover of the popular Patti Page tune from the Fifties, which bests the Raconteurs' rendition of Nancy Sinatra's "Bang Bang (My Baby Shot Me Down)." Meanwhile, riffs roll right off De Stijl's 2000 assembly line for "Bone Broke," "Little Cream Soda," and "I'm Slowly Turning Into You." Meg and Jack successfully scrap together "Rag and Bone," but stall on the tracks with "300 M.P.H. Torrential Outpour Blues." "You Don't Know What Love Is (You Just Do as You're Told)" is peppermint-coated Tom Petty, and the otherwise charming Scottish ode "Prickly Thorn but Sweetly Worn" melts down in a clustered disaster during "St. Andrew (This Battle Is in the Air)." It's nothing less than what's expected.