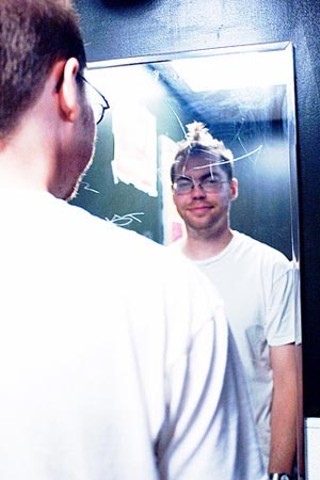 "Now I see this clearly. My whole life has been pointed in one direction." (Photo By Aasim Syed)

Is That All There Is?

In January 2003, when TCB inherited the task of reporting Austin's music news from friend/mentor/ex-roommate Ken Lieck, he had a girlfriend, good credit, a decent bank-account balance, a clean driving record, and a relatively healthy liver. Today, some 227 columns later, he doesn't. The price of those 275,000 words – a rough estimate based on 1,200 words per week, though the column was longer in the beginning – has been steep, much more than any sane person should ever consider paying. Naturally, TCB would do it all over again in a heartbeat. As the accompanying pictures only begin to suggest, it's been a ball.

For 41Ú2 years, TCB has been observer, interpreter, critic, and frequent participant in an unprecedented era of growth, expansion, and prosperity for the local music scene. Now, frankly, he's fucking exhausted. This column is a 9-to-5 job, sure, just 9pm to 5am. Then there's the small matter of stumbling into the Chronicle office around the crack of noon to write it all down, or at least what TCB can remember. Besides, even if he had two or three times the room, it still wouldn't be enough to cover the level of musical activity that happens in Austin in a slow week. Apologies, then, to everyone TCB couldn't squeeze in here. Luckily, it doesn't seem to have stopped you.

Not so long ago, Austin's music scene was struggling alongside the rest of the local economy. TCB's early columns were full of dire accounts of beloved Austin institutions (Sound Exchange, Steamboat) giving up the ghost. Then something happened. It's hard to say exactly what, but a good starting point might be the May 2003 election of Mayor Will Wynn. A shrewd businessman and legitimate live-music fan, Wynn and his administration have promoted – some would say exploited – Austin's music community like none other in history. According to the state comptroller's office, the total economic activity generated by Austin's music industry in 2005 was more than $600 million, creating nearly 11,200 jobs and $11 million in sales-tax revenue. How much of that money makes its way back into the scene itself is debatable, but all TCB knows is that his more recent columns have been dominated by venues opening, not closing. 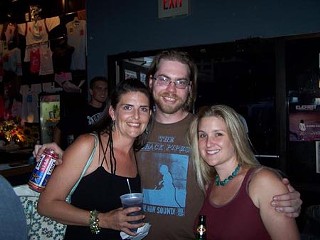 With "wives" Jessica and Amber at Antone's

Moreover, the Austin City Limits Music Festival mushroomed from local curiosity to one of America's most important musical weekends almost overnight. Founders C3 Entertainment parlayed that success into a position as arguably the nation's premier talent brokers – just ask Perry Farrell, Pearl Jam, or any of the 128 other bands playing C3's Lollapalooza this year. Likewise, South by Southwest has grown from springtime expense-account write-off and barbecue to something no music-business employee from Austin to Adelaide or Aberdeen dares miss. Since 2003, the number of artists playing our annual March Madness has nearly doubled, as has the approximate amount of people who love nothing better than bashing SXSW on the Internet. The blogosphere has also been an invaluable shortcut from local buzz to national, even international, acclaim for a number of Austin acts: Okkervil River, Shearwater, Voxtrot, Octopus Project, Black Angels, and Ghostland Observatory, for starters. Talents as diverse as the Dixie Chicks, Trail of Dead, Riverboat Gamblers, Spoon, and Los Lonely Boys have directed enough media spotlight our way that scarcely an edition of Spin, Rolling Stone, or Pitchfork goes by without some sort of Austin allusion. Pretty idyllic, right?

Maybe, maybe not. In less than half the time, TCB has written many more obituaries than Lieck ever did, or at least it feels like it. The toll of the Austin lifestyle, often every bit as hedonistic as Vegas, L.A., or Deadwood, is reflected in the creation of the Health Alliance for Austin Musicians and explosion of business for the SIMS Foundation, which only came into its own with the rash of Red River suicides two years ago. Granted, most cities aren't nearly progressive enough to create a social safety net for their creative class, but that Austin had to at all suggests pursuing a music-related livelihood isn't the healthiest option on the menu. And as people age and keep enhancing their musical experiences with every controlled substance under the sun, it's only going to get worse.

TCB's audition for the Hungry Gators went better than expected.

More abstractly, every time Austin uses its musical bounty as a marketing ploy to lure yet another corporation to Central Texas, or otherwise fatten its tourism coffers, the music risks becoming a mere commodity. Those consequences are much harder to quantify but no less real. Austin hasn't killed the goose laying the golden egg yet, but that goose is getting mighty tired. Furthermore, given the past month's tragic events – the Juneteenth beating death of David Morales and ongoing police troubles embodied in the Kevin Brown shooting – perhaps Austin channels too much energy and resources into perpetuating its music-capital image and not nearly enough into more fundamental social services. Like, for starters, teaching people how to coexist without resorting to violence. Just saying.

Anyway. Hate to cut bait here, but as of today, Austin is no longer TCB's concern. (Professionally, that is.) The Bayou City beckons, and more important matters are at hand, namely the pounds due my Chronicle friends and colleagues who put up with him these past few years. Margaret Moser, you recruited me into the Chronicle cabal all those years ago (although Susan Antone really did find me first). I don't know whether to thank you for that or not, but I'll watch "Hank's Birthday" with you anytime. Raoul Hernandez, you have the patience of a saint, and you've needed every ounce. Gracias. Now that I'm leaving, do me one last favor and cheer up, for chrissakes. And stop spending so much money on music – you do know you can download it for free now, right? 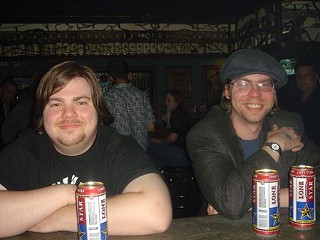 All in the family: TCB (r) and brother John at Rudz in Houston

Mark Fagan, remember true playas always keep it trill. Darcie Stevens, you are one of the sweetest people on Earth and a much better writer than any of the cretins who drink that "Postmarks" haterade. Audra Schroeder, I love you in God's way, and one or two others you don't even want to know about. Jenn Nuzzo, your loss. Wells Dunbar, holla. Anne Harris, don't ever change. Shawn Badgley, Astros still rule. Andy Langer, you run this town. Photographers John Anderson, Gary Miller, Todd V. Wolfson, Aubrey Edwards, Mary Sledd, Courtney Chavanell, Felicia Graham, Aasim Syed, Michael Crawford (check out TheRockGarage.com); illustrator Nathan Jensen; and Art Director Taylor Holland: thanks for making my words look so good. Proofreaders, NSFW. Everyone at the tree, I'll think of you every time I'm in an actual music meeting. Nick Barbaro, make sure Eevee doesn't starve. Louis Black, thanks for not firing me, because I know you wanted to at least once a day. The rest of the staff, it's been a privilege working with you. Finally, Austin Powell, taking over this space next week, you have no idea what you're getting into. But you'll learn. Oh my God, will you learn.

To everyone else, the innumerable friends, lovers, neighbors, contacts, clubowners, managers, bartenders, waitresses, bouncers, sound guys, label owners, publicists, booking agents, cops, cab drivers, dealers, deejays, street-food vendors, and especially the musicians and readers, I offer my profound gratitude. Stop by the Supersuckers tonight (Thursday) at Emo's or Club de Ville tomorrow, and I'll thank you in person. Truly, the pleasure was all mine.