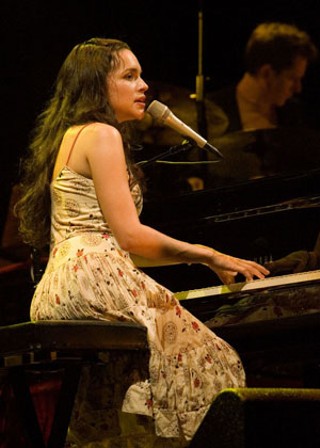 You know the parking situation at the Backyard is in bad shape when the headliner mentions that she delayed the show because of it, then gives it a thumbs down. That frustration dealt with, Norah Jones' performance put the lie to her reputation for putting people to sleep. In a wide-ranging set that alternately leaned on her latest release, Not Too Late (Blue Note), and covers from the songbooks of Hank Williams, Willie Nelson, Creedence Clearwater Revival, and Townes Van Zandt, Jones proved so engaging that her 80 minutes onstage slipped by too quickly. While never rising to the level of a scream, the Dallas native and her Handsome Band raised the evening's sultry temperature several degrees in creating captivating moods with a wide array of offbeat instruments that included banjo, marimba, and harmonium. There were exquisite moments, as when the venue's cicadas added their voices to the cocktail jazz Jones offered, especially on the unusually dark and daring "I've Got to See You Again," which approached Tom Waits territory. "That's the end of the creepy stuff," Jones remarked, though she continued to take chances, holding nearly everyone breathless. Of the new tunes, the subdued pop of "Thinking About You" stood out, a contrast to the country, soul, jazz, and blues that the dark-haired beauty mixed throughout the performance in demonstrating the range she's capable of with her marvelously subtle voice. Toward the set's end, opener M. Ward came out for a swampy, yet forced, cover of CCR's "Green River." With an encore that included "Don't Know Why," of course, and the enigmatic "The Long Way Home," Jones and the gathered devotees hit the parking lot beaming from ear to ear.