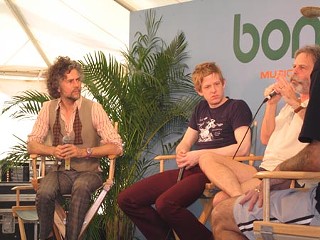 News 8 Austin and the Chronicle's Andy Langer had a memorable first trip to Bonnaroo in Manchester, Tenn., last weekend. Sunday evening Langer visited with Ornette Coleman en route to see Mavis Staples sing "The Weight" with the Decemberists then, during Coleman's set, ducked into the crowd to steal a smoke with the Dead's Bob Weir, when the 77-year-old jazz legend and 2007 Pulitzer Prize winner collapsed onstage. "It was the scariest 20 minutes of my life," Langer says. "I thought I was watching somebody die." Coleman was treated for heat-related dehydration at a nearby hospital and released Sunday night. Langer also moderated an artists' panel with Weir, Wayne Coyne, and Spoon's Britt Daniel. "It turned into the Wayne and Bob show," he says. "They can talk for hours on end. Britt got about two words in." Spoon's two-hour set "killed," he says, as did the Hold Steady and a late-night Ben Harper/John Paul Jones jam on several Led Zeppelin songs. Coleman's medical drama caused Langer to miss the White Stripes, but, he says, "everyone said that was the best thing they saw." The Stripes have been slotted to close Saturday night of the Austin City Limits Music Festival (www.austincitylimits.com/schedule).
More TCB columns