Descent Into the Maelstrom 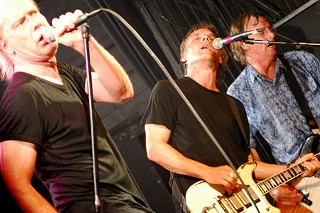 The edge of the whirl was represented by a broad belt of gleaming spray; but no particle of this slipped into the mouth of the terrific funnel, whose interior, as far as the eye could fathom it, was a smooth, shining, and jet-black wall of water, inclined to the horizon at an angle of some forty-five degrees, speeding dizzily round and round with a swaying and sweltering motion, and sending forth to the winds an appalling voice, half-shriek, half-roar, such as not even the mighty cataract of Niagara ever lifts up in its agony to Heaven.
– Edgar Allan Poe,
"A Descent Into the Maelström," 1841

Ann Arbor, Mich.'s Iggy Pop and his stoolies Ron and Scott Asheton touched off a street-walking primal beat that resulted in U.S. first-wave mop tops the Ramones long before the Sex Pistols got half-cocked. Meanwhile, in the land down under, Radio Birdman and the Saints lashed out in a parallel vacuum while the rest of the world began its transfixion with the disco ball overhead.

Radio Birdman guitarist Deniz Tek, who emigrated from Ann Arbor to Sydney, Australia, in 1972 to study medicine, was there. Sub Pop's The Essential Radio Birdman (1974-1978), released in 2001, spelled it out ABC with surf agitation "Aloha Steve & Danno," rumblers "Hand of Law" and "Smith & Wesson Blues," and plasticine skank "Do the Pop." Missing only was a rabid cover of the 13th Floor Elevators' "You're Gonna Miss Me."

Austin Chronicle: I'm reaching you in Montana. What do you do there?

Deniz Tek: I'm an emergency medicine specialist. If you get brought into the ER, I'm the doctor that takes care of you. I'm here roughly about half the year. I've got a son in college here so, I spend part of my year here to be near him.

AC: And the rest of the year?

DT: Mostly with the band, in the rest of the world, wherever we might be. Sometimes, if the band's not working and I'm not working here in Montana, then I'm working in Australia, either doing medical work or consulting-type stuff.

AC: Is Radio Birdman a release from the rigors of medicine?

DT: I think they complement each other pretty well. Medicine's very left-brained and very cognitively oriented, and music is more from the heart and right-brained and improvising and just being in the moment. It's a lot freer. There's not rigid guidelines. In fact, to me, in music, there should be no rules whatsoever. I think it's a pretty good balance.

AC: Ever had to resuscitate anyone at a club you were playing?

DT: [Pregnant pause] Not really, no. I wouldn't have the equipment anyway.

AC: But if someone yelled, "Is there a doctor in the house?" you'd have to step forward, right?

DT: Well, me or Pip – Pip Hoyle, our keyboardist. Maybe I'd lay low and hope he'd stand up. I did put in a guy's dislocated shoulder once. Nothing beyond that.

AC: Can it really be true that Radio Birdman's first American tour was last year?

DT: In its first incarnation, the band only lasted about 31/2 years. I think we formed in September 1974, and broke up in June 1978. Our first album and first EP were independently released in Australia – the do-it-yourself thing. We then signed to Sire for the rest of the world, which ended up being a mistake. We went to England, toured with the Flamin' Groovies, and then the next thing we were supposed to do was tour the U.S. with the Ramones. But we got dropped from the label before that happened, and there we were in the UK with no money, very burnt-out, and no prospects. We'd been on tour for six months, and we called it a day at that point. So we never got to America. The band got back together in '96, and there wasn't the financial capability of coming to America until last year.

AC: I saw the New York show last year. You guys were red-hot.

DT: We enjoyed that New York show. The city has so much energy anyway, and if you can tap into that, the buzz of just being there is just so great. About 10 minutes before we went on, [BÖC's] Al Bouchard [see "Death Valley Nights," February 16, 2007] came to the dressing room. One of our big heroes gave us encouragement, so we were just fired up.

AC: I'd hoped you guys would play South by Southwest this year.

DT: We have six guys in the band, a manager, a couple of road crew. It's very expensive touring from Australia. My daughter lived in Austin for a little while and said it was a great place.

AC: Instead of Radio Birdman at South by Southwest 07, we got the Stooges. Who's got the better reunion going right now, you or them?

DT: I saw the Stooges last month in Detroit. We opened for them at the Fox Theatre. I come from that area. That's where I grew up. The Asheton brothers are good friends of mine. The Stooges were fantastic that night. They completely blew the roof off the place. For what they do, they're the best band in the world. But what they do is a little bit different from what we do.

AC: What's the connection between Radio Birdman and surf music?

DT: That's part of our musical upbringing. The first complete song I learned how to play on the guitar was "Walk Don't Run." I used to listen to the Ventures all the time. After I met Rob [Younger] and Warwick [Gilbert], then I found out about the Shadows and their instrumental stuff. So that's always really been one of our influences, and we incorporate that stuff into songwriting where and when it seems appropriate. We don't all actually surf, [and] of course the Beach Boys didn't all actually surf either. I do surf, and I hurt myself skateboarding a couple of weeks ago, so I guess that qualifies for some sort of credibility. I don't know.

AC: One of the best songs on Zeno Beach last year was the title track.

DT: A lot of people say that, and that song didn't make the initial cut for the album. We were not gonna put that on. I can't even tell you why. When you have your head in an album as deep as my head was, you just start to see things in a different way. We just didn't think that song fit on the album. We decided to master it anyway because we might use it as a B-side or something in the future. In the mastering, it came up so beautiful, and we thought, "Man, that is great." Rob said, "It's gotta be on the album." So we relented. It turns out it's one of the best tracks.

AC: My favorite Radio Birdman song, "Descent Into the Maelstrom," surfs a wicked, wicked guitar solo – yours. What can you tell me about that song?

DT: I don't actually remember playing the solo in the studio, but I've seen video of myself playing it live in those days. "Maelstrom" was an Edgar Allan Poe story. One of the hardest things is lyrics – to try and find something to write about. If you don't want to write a song about relationships and things like that, then you look further. We always looked to literature, and Edgar Allan Poe wrote this story, which is just amazing. So we wrote a song about that. The solo is just something that happened spontaneously, like all of them. I don't sit there and plan those out. They just happen in the moment, and if it works out well and gets recorded, then I duplicate it again live.

AC: You did a beautiful job live.

DT: I appreciate you saying that. That's one of my favorite of the back catalog, too. I can usually get into a pretty good headspace, where I'm playing that and going to another level.