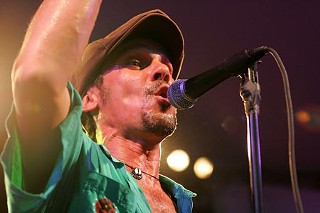 Chaos pounding backstage 30 minutes before star time, Manu Chao broke into a mischievous grin when called on the fact that this wasn't his first time playing Austin. "No, I came 15 years ago," he acknowledged in Spanish. "South by Southwest." More like 18 years ago. That would be 1989, in support of Mano Negra's madhouse masterpiece Puta's Fever, showcasing all the way from Paris at another Lost Austin hot spot: the Austin Opera House. Remember anything about the show? "Very good memories – sí, sí, sí. I know that here, too [tonight], it'll be good." Two solid hours of Chao and his backing quartet's jump, jump, jump obliterated "good." The sheer release of top-tier Latin rock bands, Café Tacuba to Molotov – both veterans of Stubb's – remains unmatched by most North American indie rock acts, and Chao, a forefather of the rock en español movement, proved yet again he's a powerhouse. He and his longtime backing clandestines performed as if they were a Mano Negra favorite: "King Kong Five." Like Little Richard or any number of touring museum spectacles, Chao doesn't so much do whole songs as he pulls pieces of them out of the high-octane skank he and his crew brew onstage. Splitting the set list evenly between his two solo albums, 1998's Clandestino and 2001's Proxima Estación: Esperanza, Chao previewed none of his forthcoming third solo disc, not even premiere tease "Rainin in Paradize," downloadable at www.manuchao.net. "Mr. Bobby" (Marley), chased by an audience member jumping onstage with a giant Che Guevara banner, "Me Gustas Tu," "Clandestino," and "Desaparecido" all stoked the house but couldn't match the locomotive "Rumba de Barcelona." By the same token, "Merry Blues" and "Dia Luna … Dia Pena" paled next to the punk rock lashing of "Volver, Volver." Yes, that "Volver." That left a pair of encore sets, the first touched off by Puta's Fever convulsion "Mala Vida," the second by Fever's "Sidi H' Bibi." Fever dreams don't burn any brighter.